The HollyShorts Awards were presented last night in front of a standing room only crowd at OHM in Hollywood. Hosted by Damon Campbell and Gabrielle Loren, Awards were given to the top short movies created from content creators from all over the globe. 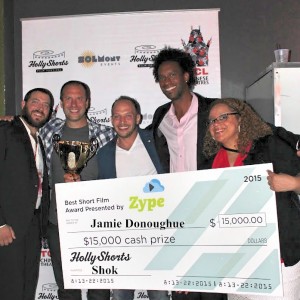 The ceremony drew nearly 1,000 attendees and included the following winners:

Company 3 and Method Studios Awarded over $60,000 in post production prizes.

The Grand Jury Award Presented by Company 3 went to Moon Molson for his short The Bravest, The Boldest.

Best Animation went to The Oceanmaker by Lucas Martell.

Best VFX went to Dissonance by Till Nowak.

Best Film Shot in LA presented by FilmLA went to Tom In America by Flavio Alves.

The Louisiana Film Prize, a $10,000 prize for Best Screenplay, went to The Importance of Sexual Education by L. Elizabeth Powers

Screenings will continue through Saturday at the TCL Chinese 6 Theatres and the closing night party for the 11th Annual Hollyshorts Film Festival takes place that same night at the W Hollywood.