I really, really wanted to like Zoolander 2. Or is it 2oolander? No. 2? Whatever they want to call it. Derek Zoolander’s (Ben Stiller) adventures in the first film 15 years ago are things I look back at fondly and will still sit down and watch if it happens across my television screen.

However, the latest in a long line of films that attempt to cash in on the nostalgia of 90’s and 00’s comedy falls short like its predecessors (Dumb and Dumber To and Anchorman 2, I’m looking in your direction). 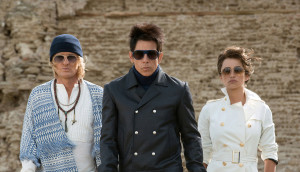 Like the aforementioned sequels, Zoolander 2 relies on a built in audience and recycled jokes from a decade and a half ago to fuel a fire of obsurdety. One would think that a film that playfully offs Justin Bieber and ends with a shot of scientific and internet darling Neil Degrasse Tyson would be a dream; and sure, it has some laugh out loud moments, but they are lost in a sea of offensive drivel and shoehorned cameos. One could see how Benedict Cumberbatch’s androgynous model All could have been a welcome, funny addition to the film, but the appearance is ruined almost immediately by Hansel’s (Owen Wilson) reaction. Hot dog or a bun? Come on… Justin Theroux and the writing team are better than that.

By far the best performance in the movie comes from Kristin Wiig as Alexanya Atoz, the overly botoxed, floating fashion icon who turns out to have been working for Mugatu (Will Ferrell). Speaking of Ferrell, even his performance doesn’t come close to matching the hilarity of his role 15 years ago. Do yourself a favor, watch the trailer for Zoolander 2 (you’ll see all the funny jokes, and a few bad ones) and then go see Deadpool this weekend instead.