FABLAB BRINGS SCIENCE BACK TO TELEVISION

The show is part of the Xploration Station’s Educational and Informational STEM program block and is attempting to help and encourage young girls into entering the field of science, technology, engineering and math (STEM).

The show being the first of its kind aimed at teenage girls is set for 88 episodes and is already receiving plenty of celebrity support and sponsorship by companies such as L’Oreal and Samsung. 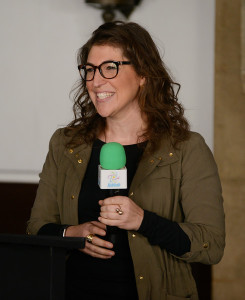 Big Bang Theory’s will be co-hosting shows on FabLab TV.

The show targeting young students from the ages of 13 to 19 to be reporters and corespondents on the show, to help with identifying problems and finding solution’s to end some of earth’s problems.

Their press conference was held at The Archer School For Girls, one of the top STEM focused schools in Southern California. Part of the conference included a scientific demonstration by FabLab TV host Nick Uhas, which had all students and celebrities in disbelief.

One of the major supporters is the Big Bang Theory‘s Mayim Bialik, as both an actress and real life neuroscientist, Mayim will be part of FabLab’s interactive segment called “Ask Mayim.”

“Getting girls involved in science (or STEM) is a personal passion of mine,” says Mayim. “I hope to get more young women excited about getting into the field that I love so much.”

Other stars such as Leonardo DiCaprio, Karlie Kloss, Katherine McNamara, and Brec Bassinger are also showing their support for FabLab TV through their enormous social media followings.

For more information on FabLab TV visit their official website.