Bella Magazine’s Beauty Issue cover party was hosted last week at Lisa Vanderpump’s Sur Lounge by the Emmy award winning actress, Jaime Pressly, who appears on the June cover. This was the first West Coast event for the New York-based magazine and PPLA was in attendance!

Celebrities Allison Janney and Beth Hall who work with Pressly on the CBS show “Mom,” were in attendance to show their support. 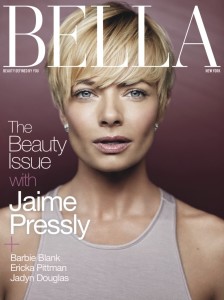 Pressly, who is most known for her role in My Name is Earl, was just one of many beautiful women sharing their beauty secrets, which included keeping things simple!  “I do my own hair and make-up before I go on-set.” Actress Allison Janney confirmed this was the case while working together on Mom.

In terms of her fitness routine post-baby, Pressly says, “My trainer Mike… He’s an ex-NFL player who doesn’t entertain excuses!” Janney said she owes her youthful physique to dancing. “I love old school hip-hop and dancing. That’s my beauty secret.”

Other celebs said it was more about happiness and positivity that keeps them looking beautiful. “Having the right energy around you is so important,” said Tilda Del Toro. “It’s more about what is on the inside that is important. Making sure you are a beautiful person on the inside. It’s hard with social media. You can look on there and start to think bad thoughts about yourself, but social media can’t show you the inside of a person,” stated actress Elizabeth Guest.

The evening was filled with people connecting and talking over champagne with everyone leaving with beautiful gift bags by Naked Princess which were filled with blue and tan moleskin journals and luxury beauty products from the store’s line.