The San Diego Comic Convention has become less about actual comics and more of a chance for movie studios to debut their newest contributions to the geek community. Last year’s convention saw a lot of groundbreaking announcements; this year was about delivering on them. 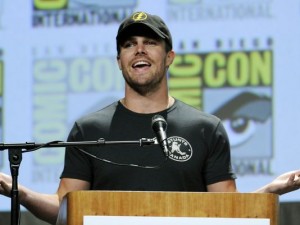 For the most part the studios did just that. Both DC and Marvel showed they know what they are doing in building their expanded cinematic universes and the fans were there to back them up. The biggest gamble was Batman v. Superman: Dawn of Justice. First announced as a teaser last year, a lucky few got the chance to see actual footage of the film showing the moment Batman and Superman first meet on screen. Though it was a bit hard to find that footage has now been leaked online and honestly, it is beautiful. Director Zack Snyder has a lot riding on the film and hordes of fans ready to tear him apart. Juggling so many characters can be rough but based on the footage that was shown he might just pull it off.

DC also unveiled the pilot episodes for its TV universe including: Gotham, The Flash, Arrow and Constantine. While not perfect each of them has a lot of potential to gain a strong following. Right now Arrow is leading that pack by creating a truly unique version of the DC universe that The Flash is happy to follow.

If most are unsure about DC’s strategy, there isn’t a soul around that is going to question Marvel’s. The studio more or less blew everyone’s mind when they announced the release dates for nine, count them nine, more films to come over the next four years. This is more or less unprecedented and not only shows the confidence the studio has in its films but the faith they have in their fans. While much of the slate is still TBD there were a few official announcements that included: Captain America 3, Avengers 2, Ant-Man and Guardians of the Galaxy 2. 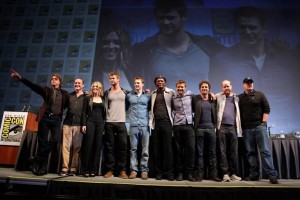 Since Marvel follows a chronological progression one can more or less surmise at least a good chunk of the open slots. Doctor Strange is pretty much confirmed for phase 3 and it is assumed that either Ms. Marvel or Black Panther will be introduced during the same time frame as well. With the supernatural, scientific, fantasy and cosmic genres wide open to them there isn’t a hell of a lot Marvel can’t get away with anymore.

Unfortunately fans do not have nearly as much faith in Fox’s properties, most of which were non-existent at the convention. The Fantastic Four was all but a no-show (unless you count a probably faked leaked image of the new Thing) but that film is destined to die a horrible death. The X-Men franchise is still alive and kicking but failed to show even concept art for its upcoming Apocalypse movie.

One of the biggest surprises of the convention didn’t involve superheroes at all, it involved an ape. That’s right, King Kong is coming back to the big screen in 2016. Next to nothing is known about the movie other than the fact that it will be called Skull Island and be totally original. One interesting thing to note about the movie is that it will be produced be Legendary Pictures who also owns the rights to Godzilla. That means way down the line (like in 2030) there could easily be another Godzilla vs. King Kong movie coming to theaters. 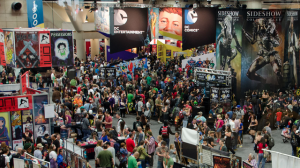 While the festival may not have been groundbreaking this year it certainly laid the groundwork for what is sure to be a fascinating next 10 years for the entire geek community.