It’s the most wonderful time of the year and no, I’m not talking about Christmas. No, I’m talking about that great part of the year filled with explosions, super heroes, giant monsters, space aliens and unhinged testosterone. Yes, I am speaking of course of Summer Blockbuster season.

It’s the four-month stretch between May and August where big men, big special effects and even bigger budgets are on full display for the film viewers around the world. There’s no time for low budget indie films and sappy rom coms. NO! Audiences want mindless violence and pure adrenaline-filled fuel rides! So which movies should you pencil in for an explosive time at the theaters this summer? 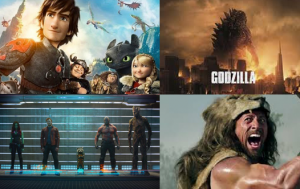 Anyone who knows me well knows it’s hard for me to hide my kid-like enthusiasm for this monstrous movie. Being a huge fan of last summer’s Pacific Rim and an even bigger fan of Godzilla films since I was a kid, I may be a bit biased in my pick for this month. However, this film has all the makings of a true kaiju classic.

Combined with an outstanding cast and top notch visual affects this looks like the modern reboot the King of Monsters has deserved for years (we will not speak of that 1998 travesty). So whether you’re a crazy kaiju fan like me or just want to see a giant CGI lizard destroy San Francisco, this is the film to watch this May.

Others to watch: X-Men: Days of Future’s Past, Maleficent.

How to Train Your Dragon 2

Those looking for a break from the testosterone should definitely give the sequel to 2010’s surprise animated hit How to Train Your Dragon a look this June. The first film boasted not only great animated visuals and top notch 3D but a heartwarming story that film fans of all ages could enjoy.

The voice casting is great from top to bottom with Jay Baruchel leading the way once again as the Viking hero Hiccup. DreamWorks animation has slowly developed a lead over the once dominant Pixar Studios and How to Train Your Dragon is a big reason why. Those looking for a good family film to watch this summer should definitely find time for this epic sequel.

Others to watch: 22 Jump Street, Edge of Tomorrow.

I have guarded optimism about this film. On the one hand it stars “The Rock” a man who is guaranteed Box Office Gold, practically pisses charisma and action bravado and he’s playing the biggest action hero of ancient history; Hercules. On the other hand the film is being directed by Brett Ratner. You know; the guy who directed X-Men 3.Excuse me while I go throw-up a little.

It’s okay though, this time around Ratner won’t be handling a large franchise and all he needs to do is make a big-dumb action film. And that’s all this needs to be; big-dumb action film. Dwayne Johnson will be sure to show giant Lions, Hydras and monsters alike “What the Hercules is cooking” this summer when it rumbles into theaters July 25.

Others to watch: Dawn of the Planet of the Apes, Jupiter Ascending.

Guardians of the Galaxy

The Marvel Studios machine keeps on trucking this summer when director James Gunn debuts a new batch of heroes to the Avengers cannon: Guardians of the Galaxy. This film looks better and better each time I see a trailer for it.

Chris Pratt looks great as the bumbling hero Star Lord, Zoe Saldana is her typical strong female character self and of course who doesn’t want to see Vin Diesel play a talking tree. It looks like a fantastic mixture of science fiction action and campy humor. I’m sure fans of Serenity will enjoy it. In any case, whether you’ve been following the Avengers cannon or just enjoy a good ol’ fashion action comedy, Guardians of the Galaxy is the film to watch this August.

Others to watch: Expendables 3, Sin City: A Dame to Kill for.