The show honors kids’ favorite athletes, teams and sports moments in one big, slimy sports celebration.  The red carpet was full of celebrities from TV, sports, and music including the U.S. FIFA Women’s World Cup soccer team, Carmelo Anthony of the New York Knicks, singer Ciara, TV personality Nick Cannon, and the casts of  your favorite Nickelodeon shows including”The Power Rangers,” “The Thundermans,” “100 Things To Do Before High School” and more. 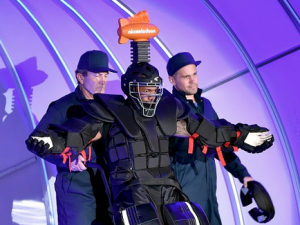 The show kicked off with Nick Cannon in full body padding with a Nickelodeon blimp atop his head (Mo’Ne Davis then had six chances to throw a baseball to crack that blimp) and went on to include a tug of war to see how many kids in takes to bring down Marshawn Lynch!

Five-Time World Series Champion Derek Jeter who walked the carpet along with his adorable nephew Jalen, was honored with the Legend Award in recognition of his unmatched talent, integrity and sportsmanship on and off the field.  He was ceremoniously slimed similar to last year’s  superstar David Beckham who was doused in golden slime with his kids.

Other highlights of this year’s show included the “Triple Shot Challenge,” which gave three kids ages 9-14 an opportunity to score $50,000 during the live broadcast by making a hard shot in their respective sports- football, soccer, and basketball. Two of the three kids walked away with a check! 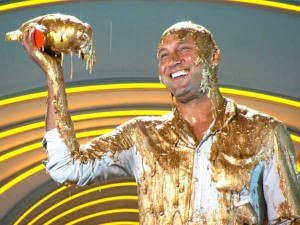 Speaking of breaking records, Carmelo Anthony attempted to break the record for the most high fives (he came close!), Ciara busted a move with a dance-along doing the whip and the nae nae, and Stephen Curry took home two awards for Best Male Athlete and Clutch Player of the Year out shined only by his biggest supporter, daughter Riley.