Ever wonder why certain celebs sit next to one another at awards shows?  Or what gifts the presenters and winners take home? With the MTV Movie Awards just two days away, Press Pass LA attended a preview to give you a behind the scenes look and answer these questions!

The show’s Executive Producer, Jesse Ignjatovic says the process of seating is long and tedious because you have to “Make sure people are vibing each other and you have to make sure that when you look at certain areas that you see a lot of great faces together and that they’re having fun.” 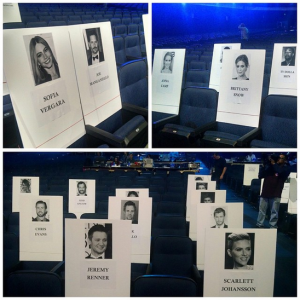 With that in mind…

Brittany Snow will be sitting next to her Pitch Perfect 2 co-star Rebel Wilson.

Mark Ruffalo will be sandwiched in between Chris Hemsworth and Chris Evans. Please make room for one more seat there!

Scarlett Johannson will be right in front of Chris Hemsworth.

Kevin Hart will be next to Reese Witherspoon and in front of Robert Downey Jr. and Mark Walberg.

Kelly Osbourne will be next to her co-star for the evening Jesse J.

Jimmy Kimmel will be in front of Charli XCX.

Sofia Vergara will be next to her love Joe Manganiello. 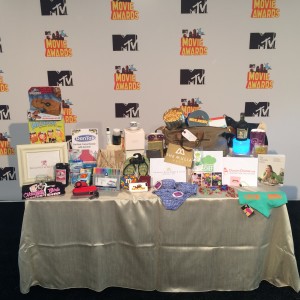 Whew, that was like planning a wedding! What kind of goodies are the stars going home with? (Oh, how the stars get spoiled!)

Booty shorts that read “Love My Bounce” from STK MKT Entertainment, a multimedia company that encourage women everywhere to love their bodies.

And this is definitely not it! Some other fancy items include bracelets, beachwear, Ernest Alexander leather bags, oral care, Himalayan Salt Tequila Shot Glasses, Calvin Klein Eye-wear, moisturizers and of course popcorn all presented in the official MTV gift bag by Backstage Creations!

However, celebrities aren’t the only ones benefiting from these high-end gift bags, this year a portion of the proceeds will go to the Anti-Defamation League, a civil rights and human relations agency.