With a week until the Oscars it is still anyone’s game. The nominations, despite their lack of racial diversity, cover a wide spectrum of genres.

The fact that there are not one but two science fiction films being nominated is worth noting. The genre is typically looked over in the major categories and ends up getting appreciation for technical achievements. Not so this year when both The Martian and Mad Max: Fury Road go head-to-head with art house classics like The Revenant and Spotlight. Let’s face it, if there’s a movie on the opposite end of the spectrum than Mad Max it’s Spotlight. 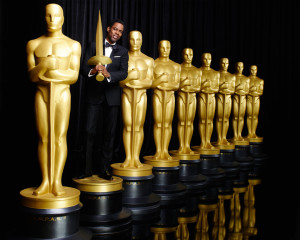 Odds are though the winner will be The Big Short, a favorite both inside and outside of the industry. The fast-paced, highly intelligent film boasts a fantastic ensemble cast and a story that resonates deeply with audiences today.

Things get more difficult to predict in the Best Actor and Actress categories. Though everyone is begging for Leonardo DiCaprio to get it, don’t count out Eddie Redmayne and Bryan Cranston to win. Redmayne’s performance in The Danish Girl was breathtaking. The truth is that as amazing as Matt Damon was in The Martian (he probably could win in another year), for me it paled in comparison to a lot of the other performances being nominated.

Though it wasn’t distributed to a wide number of audiences Brie Larson should and most likely will win for her stunning performance in Room. Larson is an understated actress that is finally starting to get her due. Granted she is up against heavyweight favorites like Jennifer Lawrence and Cate Blanchett but she can more than hold her own.

When it comes to animated films this year is surprisingly disappointing. Anomalisa was one of the worst films I saw this year and Shaun the Sheep was underwhelming. The only real contenders are Inside Out and When Marnie Was There. Of the two, Inside Out is most likely to win. The family film is heartfelt and imaginative in a way that so few films are these days. The fact that it comes from Pixar is no surprise.

Strangely the hottest race is in a technical category. This year saw some amazing cinematography and the nominations are among the best in the industry. Anyone that has seen Mad Max: Fury Road or The Hateful Eight understands just how groundbreaking both films were and the seeing them on the big screen was a monumental experience. In any other year they would be the fan favorites. But with The Revenant and Sicario also competing it could honestly go to anyone.

The same goes for choosing best director. George Miller proves that he can still change the game with Mad Max: Fury Road but Adam McKay became a big league contender with The Big Short. Alejandro G. Inarritu’s The Revenant was a marvel to behold as it made use of natural lighting in a way that hadn’t been done in decades. The Oscar should go to George Miller but realistically it will probably go to Inarritu.

The Academy tends to progress in baby steps. While it lacks cultural diversity it is at least starting to open to the door to films that aren’t blatant Oscar bait. Hopefully allowing movies like The Martian and Mad Max to get nominations will open to the door to stranger films that break the model of what is expected.