The 2017 Hollywood Black Film Festival (HBFF) is happening in Marina del Rey, CA.  In its 14th year, the festival has become an important forum for the African American artistic community, allowing writers, producers, directors and actors to express themselves and find their footing in the film and TV industry.   The festival includes film screenings, a script writing competition and various industry panels.  Attendees come from all around the country.

Documentary filmmaker Melody Shere’a said having her film Invisible Women screened at HBFF helped her gain valuable feedback and encouragement.  Her film is about racism against African American women in corporate America. Various women of color approached her after the screening and expressed their gratitude for bringing to light a very serious subject matter that is often overlooked.

Prentice Dupins, Sr., a filmmaker from Arkansas, said HBFF has provided him with a higher level of exposure and a great community of filmmakers.  His film, Last Stop, about a veteran, who travels back in time to the 1860s to the slavery era, has been screened at several other film festivals in the East Coast before coming to HBFF.

Jeff Gordon, founder of Writers Boot Camp, said his organization has sponsored and supported HBFF for many years because diversity is becoming more important.  Gordon led an interactive discussion at HBFF about story telling and provided a guideline on the stages and tools for the writing process.  “There is a conversation that has existed long before we arrive.  As a storyteller, it is important to identify and recognize the unique voice that you are contributing to the conversation.”

Angela Northington, an acquisition manager for the Urban Movie Channel, spoke on the Distribution panel about the change in the distribution landscape and the need for filmmakers to be aware of different time windows for theatrical, streaming, VOD and DVD releases. 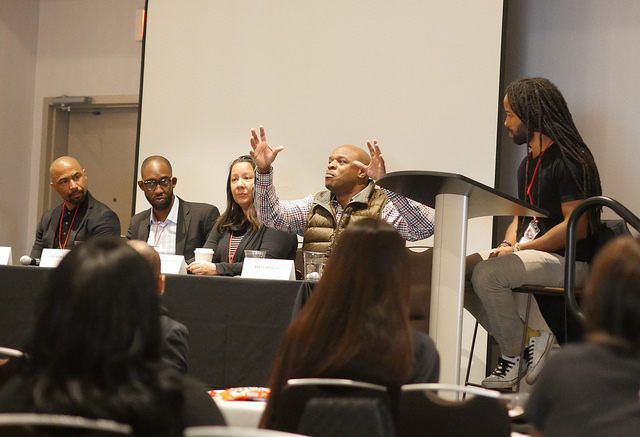 Richard Willis, Jr from Mozell Entertainment held a pitch workshop for filmmakers, helping them hone their pitch on the key elements that sell.  Willis emphasized respect and listening as the most important factors in pitching.  “While pitching is a lot about talking and selling, you cannot forget that what is most important is to listen and to show respect.”

2017 Hollywood Black Film Festival will be going on until Sunday Feb 26th.  More information about the festival can be found at www.hbff.org.