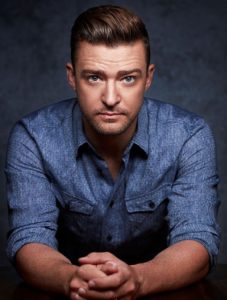 The awards ceremony, celebrating its 20th anniversary as the official launch of the awards season, will be hosted by actor and comedian James Corden, and will take place at the Beverly Hilton Hotel in Beverly Hills, on November 6, 2016.

The Hollywood Film Awards honors some of the most acclaimed films and actors, as well as previews highly anticipated films and talent for the upcoming year. Additional artists are also honored in the categories of Cinematography, Visual Effects, Film Composing, Costume Design, Editing, Production Design, Sound and Makeup & Hairstyling. Its honorees over the past 20 years have included the world’s biggest stars and more than 110 have gone on to garner Oscar nominations and/or wins. View the full list of Hollywood Film Awards Nominees for this year which include Tom Hanks, Mel Gibson, Natalie Portman, Nicole Kidman, and more.

Timberlake’s“Can’t Stop the Feeling!” debuted at No. 1 on the Billboard Hot 100 List, becoming Timberlake’s fifth No. 1 single, and making it only the 26th song in history to debut at No. 1. The second bestselling song of the summer has reached the top of the charts in over 20 countries. The song was produced by the nine-time Grammy and four-time Emmy winning musician, as well as Grammy Award winning producers Max Martin and Shellback.

The single comes from the soundtrack for Dreamworks family film “Trolls,” where Timberlake also served as executive music producer. The film stars Timberlake and Anna Kendrick, and tells the story of two trolls on a quest to save Troll Town from the evil Bergens. “Trolls” is a fresh, broad comedy filled with music, heart and hair-raising adventure. The movie is set to hit theaters November 4th. Watch the trailer above!