Glenn Danzig is well-known for his bands Danzig, and the influential punk rock band Misfits, but in between there was a dark and deathrocking hybrid, the middle stage in the metamorphosis between Misfits Glenn Danzig and Danzig Danzig, that was also a hugely important influence in punk rock history – Samhain.

Formed in 1983 and reuniting in various incarnations several times since then, the horror punk act played to a packed out Wiltern theater, on Friday September 19, here in Los Angeles, supported by New Orleans blackened death metal titans Goatwhore, and Los Angeles-based bands Kyng and Night Demon.

Often known for appearing bathed in blood on an eerily lit stage, this night was no different with a line-up of almost all original or semi-original members – of course the man Glenn Danzig himself on vocals (and briefly even guitars too), Steve Zing and London May switching out on drums and bass and newly recruited Baroness guitarist, Peter Adams. Missing from the line-up was of course, ultra-original member Eerie Von, who hasn’t been with the band since way back in the day, but Samhain purists were surely satisfied with a line-up like this, from a band that’s had its fair share of members switching in and out over the years of its many births and rebirths.

Samhain’s set began a little before 10.40, when the lights went down, and the first strains of ‘Initium’ began filtering through the Wiltern’s sound-system. The stage started to glow an eerie orange-red hue, causing the crowd to cheer wildly. First Zing appeared by the drums, followed shortly by May, then Adams, and finally Danzig made his entrance. While there wasn’t as much blood as some might have been expecting with a tagline like ’30 Bloody Years’, there was enough, along with a shirtless Baroness guitarist and a devil-locked bass player, and of course the Evil Elvis himself, onstage to keep the audience enthralled. The band put on a solid, crisp set that lasted a little over an hour, playing their 1984 album ‘Initium’ in what seemed to be its entirety. About mid-way through the set, Danzig made a crack that went something like, ‘I don’t know about you, but I hate playing guitar on stage,’ right before getting handed a guitar by his tech and launching into ‘Archangel’ doing double duty on gats and vox for the song. The band took a break as their crew switched out the stage, darkness bathing the waiting crowd. And then it was back on for the rest of ‘Initium’, and some ‘November Coming Fire’, with the tracks ‘To Walk the Night’, ‘November’s Fire’, ‘Kiss of Steel’ (Never played live here before), ‘Mother of Mercy’ and the encore, a dark and heavier Misfits cover – ‘Halloween II’.

Goatwhore, who played direct support, also destroyed with their brutal and completely different stage presence and sound to Samhain, playing a lot of tracks off their newest offering, 2014’s ‘Constricting Rage of the Merciless’, but also throwing a few crowd favorites on there from ‘Carving Out the Eyes of God‘ such as ‘The All Destroying‘ and of course, the epic ‘Apocalyptic Havoc’ that got the crowd yelling along with vocalist Ben Falgoust during the song’s classic line (and T-shirt slogan) ‘Who needs a God, when you’ve got Satan.’

Kyng and Night Demon also put on a show for a slowly filling up audience earlier in the night in their respective metal genres, each of which was different from the other bands of the night – from heavy metal, to hard rock with a splash of sludge metal, to extreme metal to the main meal of the night – Samhain’s unique death-rocking, heavy metal horror-punk vibe. 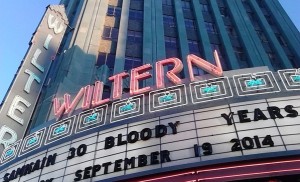 All in all what a celebration of 30 Bloody years since the release of Initium, from a band that fans may or may not get to see take the stage anytime soon again – if ever. But don’t despair, if you missed out on the evening’s entertainment, you can still catch Samhain at their several remaining shows this year, including their final show on Samhain night in NYC.