300 RISE OF AN EMPIRE: FALLS SHORT

300: Rise of an Empire is probably the longest short film you’ll ever see. If you were to play all the slow-mo scenes at normal speed the movie would be closer to 45 minutes than its hour and 42 minute running time. And that’s the problem with this late sequel to Zach Snyder’s 2007 hit film, it’s a movie that feels lazy and didn’t need to be made.

The film, based on the Frank Miller comic-book Xerxes, loosely tells the story of the naval battle of Salamis that took place around the time of the 300 Spartans and the battle of Thermopylae. This time around our hero is Themistocles who dreams of a united Greece and our main villain is Artemisia who vows to seek revenge on the Greeks who murdered and raped her family. Basically, the movie is a cheaper version of the original just on boats and the result is a watery grave for this needless sequel.

Now, it’s not like people come in to see this movie expecting Masterpiece Theater. They want blood, action and TNA and the movie, for the most part, it has this but it feels every bit like a film capitalizing way too late on the success of its predecessor. The visuals are nice but somehow, despite seven extra years of visual effects development, feel cheaper and less captivating on the big screen this time around. Slow-mo actions scenes are even more exaggerated than the first and the Greeks are twice as shirtless as they were in the orginal.

Like the original, the acting is in full dumb-action film mode. Eva Green puts more ham and cheese into her performance than a Subway shop during Comic-Con. Game of Thrones Lena Headey returns as the Spartan queen to deliver lines of exposition with all the acting charm of a wet paper bag and her lack of interest in her role is noticeable. The Greek hero Themistocles, played by Sullivan Stapleton, is a decent lead for a film like this and plays the generic action hero well, despite the lack “THIS IS SPARTA”-esque one-liners.

That’s what was lacking though from this movie; it didn’t go full 300 enough. As silly as it sounds, the film could have used some trademark Gerard Butler hamminess. Not that you should expect much out of a sequel that’s seven years late or another 300 film for that matter but the laziness and lack of execution makes this film barley matinee level. 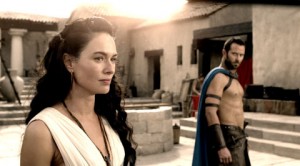 Even if you leave your brain at the door and come for the laughs the movie somewhat falls short in this regard too. The film just isn’t as crazy as the original and, despite some neat action sequences, is not as fun either. Sure, it’s still pretty hilarious to watch all the gratuitous bicep and ab shots of the Greek soldiers and the constant homo-eroticism that comes with it but you’re still better off staying at home and watching the far more entertaining original on Blue-Ray.

300: Rise of an Empire falls short of the original’s “so bad it’s good” qualities and sinks to the bottom of the ocean in action movie clichés and unoriginality. Watch the trailer here.