Buzzfeed isn’t the only site in town that can make a list. But this list won’t tell you which city you should live in, what it was like to grow up in the 90’s, or how you know you are from N.J. It will give you 33 reasons to pay attention to the congressional race for the U.S. House of Representatives in the 33rd District (for those of you wondering, that includes Los Angeles).

The primary race for the 33rd District will be decided in just a few days, June 3rd to be precise. While Press Pass LA, is not a political site and won’t tell you HOW to vote, we do think you SHOULD vote.  We  also can’t help but notice that some very high-profile members of the entertainment community have very publicly been making a statement about one candidate in particular, Marianne Williamson, running as an independent.

If you haven’t been following, lets get you up to speed! Seventeen candidates are competing in the primary for the open seat left by the retirement of Rep. Henry Waxman (D), four having already withdrawn. Political blogs have been reporting that while most likely the race would traditionally be won by a Democrat,  Marianne Williamson (I) has a real chance to win the election in November  (Nov. 4th) if she makes it past the primary.

So just who is this top contender, Marianne Williamson, and her supporters? And how did she gain such an impressive collection of endorsements, ranging from Hollywood’s A-list, to modern spiritual leaders, to the U.S. government’s biggest advocates for progress.

Here’s or list of the Top 33 Most Prominent People Endorsing Marianne Williamson: 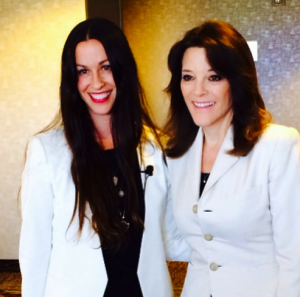 Alanis wrote an original song inspired by and in support of Marianne Williamson’s campaign. Watch it here on E! Entertainment.

Long time friend and supporter, Eva is excited to see what Marianne can do in Congress, watch why here.

Steven Tyler performed live for hundreds of fans in support of Marianne’s campaign, tickets cost as much as $5,000!

Nicole and her lovely lavender locks says that America is ready for enlightenment in this endorsement video.

Music legend, Chaka Khan, performed at a private Malibu estate to raise funds to support the movement to get money out of politics. 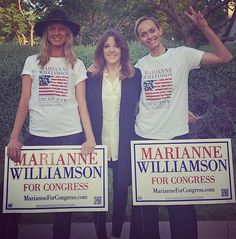 Amber hosted a political house party for Marianne and has been very supportive on social media.

Futurist, Barbara Marx Hubbard, recorded an endorsement video for the campaign and says “I love the idea of Marianne Williamson in Congress!” Watch the full video here.

This producer and political newcomer decided to discontinue his own, personal candidacy for the SAME seat in support of Marianne’s campaign. See the live announcement here.

The Orange is the New Black star shares these sincere words in support of Marianne, watch!

Kourney joined sister Kim as they dabble in politics. The Kardashians really do have their hands in everything!

Kim got all dolled up for a low key night with friends Nicole Richie and Katy Perry for a Marianne Williamson Press event. Check out the photo on the Daily Mail. 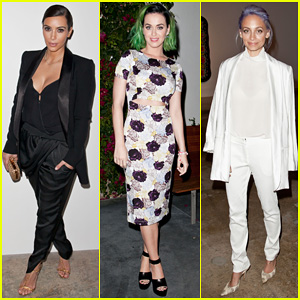 13)  Katy Perry (The Recording Artist who needs no introduction)

Katy Perry came by a Marianne Williamson press event to show her support.  You know if Just Jared was there to catch it, it was legit.

This song bird performed at a Malibu cottage for one of Marianne’s first major campaign fundraisers. Read that again, I said private show with The Jason Mraz. That could certainly sway our vote.

Kendra joined model Katie Cleary at her Calabasas estate to host a private conversation about politics today with Marianne. She tweeted the experience here. Press Pass LA founder Jennifer Buonantony was in attendance to see what all the fuss was about out in person. Her verdict: lady can give a speech!

This New Age Guru supported his colleague by recording this personalized endorsement video.

The Desperate Housewives alum reportedly danced the night away after a successful high-energy rally featuring a live performance by Alanis Morissette. 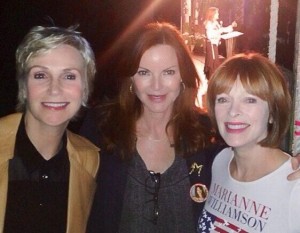 Jane was seen at a rally for Marianne Williamson on May 19th in Beverly Hills and even helped collect donations for the campaign. Hear what she has to say about Marianne here.

This former pro wrestler and renaissance man says, “Marianne is the type of leader we need in Washington today. I commend her for running and support her 100 percent.” See his interview with Marianne.

Ellison’s impressive political resume lends even more heft to this incredible endorsement: “I proudly endorse Marianne Williamson. She is a progressive leader who offers to inject a spirit of love, generosity and inclusion into politics as usual. We sure need it. Not only does she challenge conventional politics, but she also challenges spiritual activists because she invites them to bring mindfulness and love into the profane world of politics where knotty problems like campaign finance, stagnant wages, and climate change need solving. Of course, the spiritual activists, like Martin Luther King, Dorothy Day, and Bishop Desmond Tutu, have always incorporated the sacred into their activism, and achieved results. So in a way, her candidacy is reminding us of how true and meaningful change really happens.”

Blogger and author of Daily Love: Lessons Learned on a Journey from Crisis to Grace shares his thoughts on Marianne here.

“Marianne Williamson is a truly inspirational leader of our time. I find her stand on “Conscious Politics” profound and support her U.S. congressional candidacy in California.” See more.

24) Andrew Keegan (Actor, best known for 10 Things I Hate About You)

Andrew has attended a number of events in support of Marianne Williamson for Congress. And who could argue with that smile! 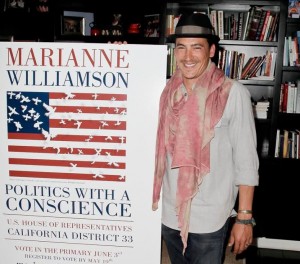 Meredith came by campaign headquarters to do some volunteering! Check it out here.

Jannifer Granholm says, “I have known Marianne for years and have witnessed the positive impact she’s had on many lives. It’s wonderful that she is running for Congress. She has tremendous talent and skill to bring to the country at large.”

Frances has not only been present for almost every major rally and demonstration in Marianne’s campaign, she hasn’t taken off the MW for Congress t-shirt since the campaign began in October of last year! Check out this dedicated friend’s endorsement here.

The Spirit Junkie author was mentored by Marianne Williamson and has been very supportive of the campaign through social media.

Best known for his substantial appearance in popular documentary, The Secret, Dr. Beckwith supports Marianne by hosting her at his wildly successful New Thought church in Culver City, as well as singing her praises at rallies, like this one here.

Birds of a feather flock together, don’t they? Jack, like Marianne, is known for inspiring the lives of millions. Check him out here. 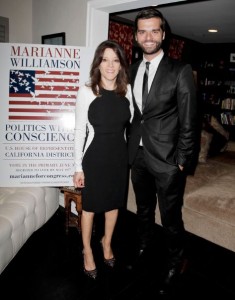 Quasi-socialite, Ben Decker, has all but dedicated his ENTIRE  social media presence to Marianne’s campaign, fearlessly intertwining his trademark spiritualism in with his political twitterstorm.

Check out this political heavy-hitter’s endorsement.

“Marianne Williamson has taught us that ‘playing small doesn’t serve the world.’  Every Member of Congress needs to hear those words.  We all need to ‘play big,’ and create a world where each one of us is free to – in Marianne Williamson’s words – ‘let our own light shine.’  In a nation where Marianne Williamson helps to make the laws, our differences will no longer divide us; they will be cultivated and nurtured and cherished, so that every one of us can be all that he or she can be.”

Marianne Williamson is an author, spiritual leader, political activist and philanthropist, who is now running as an Independent for Congress in California’s influential district 33. For more information on her platform, visit Marianne Willamson for Congress. Support on social media #MarianneforCongress.

So take the ten minutes you would spend on the latest internet quiz to cast your vote this week.  Whoever you support,  it’s time to “Get What Matters” Los Angeles. GO VOTE!