Looking back it is hard to remember the days when audiences only had a network television programs on the air. We live in a new age of television programming, one that is no longer bound by the restrictions of season long formatting or censors. Need proof? The 4th Annual Critics’ Choice Television Awards named FX the most awarded television network of the year followed by HBO.

While some network shows did win this year they were few and far between. 2013 was a year of epic television that, in many ways, has helped to usher in the medium’s next Golden Age.

Thankfully the standout shows got their due. Orange is the New Black dominated with three wins including Best Comedy Series, Best Guest Performer in a Comedy Series and Best Supporting Actress. The only show to give Black a run for its money was True Detective with an equal number of wins. Both shows allow use unique narrative structures to tell the story that needs to be told. Can you imagine True Detective on NBC with 22 episodes? It would fail horribly.

Another groundbreaking show that got its due at the awards show was BBC America’s Orphan Black. Lead actress Tatiana Maslany has given a jaw-dropping performance through both seasons of the show and, if all was fair in the entertainment industry, should be offered everything under the sun right now. Sadly, Orphan Black still remains a cult show flying just under the radar.

The biggest surprise of the night went to Allison Janney for her performance in CBS’s Mom. While Janney is a fantastic actress the show itself is relatively unremarkable. It says something to the quality of her work though as her award has to be shared with Kate Mulgrew of Orange is the New Black. 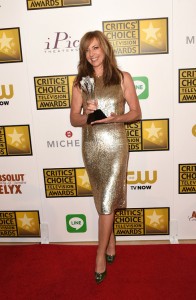 Keep in mind these awards come from the Broadcast Television Journalists Association (BTJA) and may not be a reflection of award shows later in the season. Odds are some of the more obscure shows that won like Orphan Black and Archer might not make the cut with mainstream audiences. That being said, the 4th Annual Critics’ Choice Television Awards Showcase has once again pinpointed the turning of the tide in television.

While studio networks are still capable of producing high-quality shows the critical acclaim lies with nonrestrictive storytelling techniques. It wouldn’t be surprising at all to see the networks totally phased out of most awards shows within the next five years.