It was a star-studded night for a great cause at the 5th Annual Thirst Project Gala as celebrities from film, television and music gathered at the Beverly Hilton to support the charity’s efforts to provide clean, safe water to communities around the world. Award-winning actress Jennifer Garner hosted the evening.

The event  honored those who have made a difference in the fight against the world water crisis, as well as educated and engaged guests by directly connecting them to the communities they are helping. 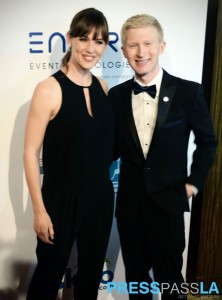 The program of the event has definitely struck a chord with the stars who attend, as actress Cassie Scerbo (Make It or Break It) told Press Pass LA. “This is my third year in a row here. I came here the first year, watched the presentation and was shocked just by hearing the fact that there are people walking days and days on end to find water, which we are so privileged to have two feet away from us in our bathrooms here in America. It was so shocking to me.” said Scerbo, who added she appreciates how simple The Thirst Gala makes it to actually help and be involved. “The thought of being able to buy a well, which I did the first year and I pitched in again the second year, just so people are able to live! The water crisis is one of the leading causes of death! We’re able to build these wells, we have that opportunity, so why not? We can save lives! It’s just so gratifying. So fulfilling. You go to all these events, you go the gifting suites, you get things, but it feels so much better to give. We already have so many wonderful things in this country. Water alone is wonderful!”

The Thirst Project builds fresh water wells in developing nations and impoverished communities around the world. The non-profit travels across the country speaking at schools and educating students on the global water crisis, as well as challenging them to fundraise to build wells.

“The wells are an amazing cause because it’s such a simple solution to such a massive problem,” said One Life to Live actress Jen Lilley. “What’s exciting is I remember when I first got involved with the thirst project back in 2007, it was 1.2 billion people on the planet that did not have drinking water and now it’s about 800 million. That is a huge, huge dent. It’s definitely a cause that has an immediate solution and we’re doing it. Hopefully, one day this charity will go out of business because the whole thing is solved.”

And not a day too soon can this issue be solved as approximately 4,100 kids under the age of five will die today from drinking dirty water.

Renee Olstead from ABC Family’s Work Mom said she is glad to see more awareness brought to this problem. “I believe that having access to clean water is a basic human right and it’s something I’m really happy to see getting attention. Because things like diarrhea for example, which is a leading cause of death for children, it’s something that is absolutely preventable,” said the actress. “It’s so important. Everyone needs water to survive.” 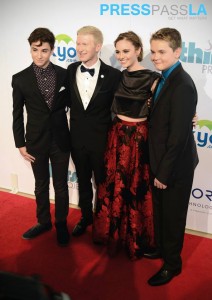 The Thirst Project is definitely helping people survive. In just five years, the charity has activated more than 300,000 students on 320 campuses across the United States. They have raised 8 million dollars and one hundred percent of those donations have been used to give more than 260,000 people in twelve countries safe water.

CEO and president of The Thirst Project, Seth Maxwell, says he is so proud of the students involved and the impact they have made that has led The Thirst Project to become the world’s leading youth water activism organization.“We have the most incredible core of 300,000 students who give so generously and come up with the most innovative ideas to help our work.”

To his surprise, Maxwell was honored during the gala by two of his own board members (Robbie Brenner, president, production at Relativity Media, and Michelle O’Droske, operations manager for Primerica) with the Thirst Project Board of Governors Award for inspirational leadership, selfless service, and unwavering commitment to The Thirst Project.

A commitment that has not gone unnoticed by Hollywood. “I met Seth and got inspired by him immediately,” said actor Drew Seeley (High School Musical). He invited my wife and I to this gala three years ago; we came, we were floored, every year we have been trying to make a bigger dent, make a bigger difference. I’m hosting a table tonight. I brought ten people and we’re going to try to get at least a couple of wells tonight. We have the resources at our disposable, why not share them with people that really, really need them?”

The Lying Game’s Allie Gonino echoed Seeley on the importance of giving as she believes water has a universal significance to people. “I think it represents something more for humanity in general. Water isn’t just something that affects 800 million people in the world, water is a connector,” said Gonino. “It’s like music: it doesn’t discriminate against sexuality, gender, social economic class; it’s what we are.” 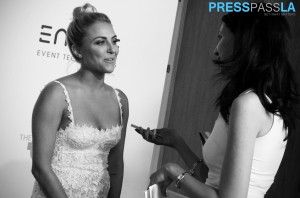 And the night’s mission of bringing fresh water around the world was definitely supported as over $250,000 was raised during the live and silent auctions.

For more information about the The Thirst Project, visit www.thirstproject.org.

See the full photo gallery from the red carpet.