For music collectors of any genre, a vinyl fair is like a treasure hunt, except the treasure chest is right in front of you. Capitol Studios had its 60th anniversary event/Wax Record Fair where multiple record stores from across Los Angeles were exhibiting their vinyl collections.

Some of those records were worth up to $300.00 and you can imagine which ones were that valuable. Lets just say some record stores had memorabilia items of Rolling Stones posters, while others had Frank Sinatra’s collections as well as Jim Morrison books. Rockaway Records was one of those small tents filled with a small preview of what their store holds, that store has records from $3.99 up to $100.00 for the most precious treasures a music collector can lavish in. 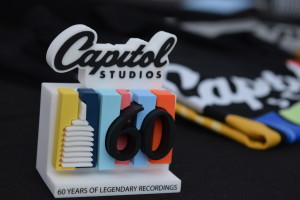 The fair took place in Capitol Records Studio Parking lot where food trucks and live entertainment kept music lovers entertained. Rare vinyls of Jimmy Hendrix as well as David Bowie were for sale, items that would cost you a day worth of work. We scored Yngwie Malmsteen’s Rising Force-Marching Out Vinyl for a whooping $8.00 but that was a pricing mistake, not all treasures are that cheap. The fair encompassed some record labels along with multiple independent record stores; which carried rare collectibles.

Tito’s Vodka sponsored the event and present in the premises was Stoughton Printing Co., which took place on, may 21 -22.  Behind closed doors of the Capitol Studios you could witness a studio tour, and interactive dj sets and vinyl making process too. That is what the VIP ticket would get you, the general admission ticket was for the vinyl fair where the live entertainment took place and of course access to thousands of rare records, books, LP’s which were all on sale. Amoeba was present, selling some record collections as well as box sets from the Doors to The Beatles, which was the time to pick one of those golden items.