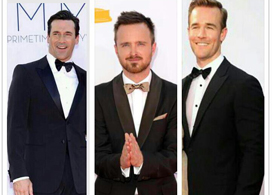 Jimmy Kimmel was a great host, providing just enough comic relief to keep the show moving. The bit with his parents was especially hilarious! Plus who couldn’t love a man who opens the show with a freak out prompted by a botched Botox treatment? However, not all Kimmel’s jokes were a hit. The late night host fell flat with a failed Tracy Morgan passing out on stage bit as well as a mock “In Memoriam” section of the show.

There were lots of memorable moments this year. One of the favorite moments of the night was when Jimmy Kimmel asked the cast of Breaking Bad if they had ever thought about what their show would have been like before it was on cable. Kimmel then showed an Andy Griffith themed clip in black and white, featuring Don Knotts, Bryan Cranston and Aaron Paul. In addition, the actor took home Outstanding Supporting Actor in a Drama Series, which produced the first tear inducing moment of the night. Paul’s acceptance speech was honest and so humble and the accolade was extremely well deserved.

Claire Danes provided one of the best acceptance speeches of the night when she accepted for Outstanding Lead Actress in a Drama Series (Homeland). The pregnant Danes ended her diplomatic speech with a shout out to her “Baby Daddy”, Hugh Dancy. Another great moment was the Modern Family bit featuring the cast taking about what a nightmare little Lily was to work with and their reactions to her diva-like behavior. It was proof that their best comedy win was no mistake.

Missing this year were the montages featuring each actor in the category they were nominated. The clips are always a favorite part of the show and show the audience individually why the nominees are so fabulous! Let’s hope they bring them back next year!

Did you enjoy this year’s awards? Share your favorite moments with us @presspassla!

Guest Actress, Comedy: Kathy Bates, Two and a Half Men

Lead Actor, Comedy: Jon Cryer, Two and a Half Men