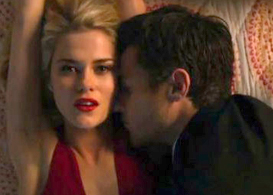 Some of the greatest shows of all time feature the setting as the main and most intriguing character in the story. ABC’s new drama, 666 Park Avenue does just that. Within the first five minutes we can tell many people move into the Drake, an upscale New York City apartment building built in 1923, but not many live to move out.

The story revolves around Jane Van Veen (Rachael Taylor), an out of work architect, and her boyfriend Henry Martin (played by returning ABC favorite Dave Annable), a young lawyer. The couple has no idea what they have gotten themselves into as they start their position as apartment managers at the Drake. The two are instantly adopted into high society by apartment owners Gavin and Olivia Doran (played by the fabulous duo of Terry O’Quinn and Vanessa Williams). However, it becomes clear the kind Gavin Doran has a very dark side, when he is later barking orders over the phone to John Barlow (James Waterston), another tenant in the building.Doran has Barlow kill a few people in exchange for Doran bringing Barlow’s late wife back from the grave. Barlow’s wife allegedly killed herself by jumping off the top of the building.

The other tenants in the building pose interesting additions to the story as well, most intriguing is struggling, emasculated playwright Brian (played by the adorable Robert Buckley) and his wife Louise (Mercedes Masohn). Brian is distracted and can’t seem to write at all in between running errands for his wife and lusting after a woman who lives across the building. The dynamic between the couple was very interesting and it appears the Drake has it in for Louise, as she was practically decapitated by the elevator doors in the season opener.

The Drake’s 388 residents should prove to have plenty of juicy plotlines to keep viewers interested. However, I can’t help but think it is a much tamer version of American Horror Story. The Drake, just like The Murder House in Horror Story, seems to compel its residents to do things. Is it too much to expect original stories anymore? Also for this show to last, it is going to have to feature much more Vanessa Williams, who was barely in the series opener. Since shows usually need a couple of episodes to find their footing, I will continue to watch. I give it a 50/50 chance of lasting, since American Horror Story might be too much for some and this would be a healthy alternative.