This year’s 84 Annual Hollywood Christmas Parade went off without a hitch, featuring massive 30-foot + balloon floats featuring everything from Gumby to pirates, star-studded musical performances by artists like India Arie and Daughtry, and celebrities like Oscar Del La Hoya and Grumpy Cat in attendance!

While Press Pass LA has long been in attendance, this was my first time personally reporting and as a newbie I can say that the event did not disappoint! Luckily, the parade had the perfect day unlike last year which met with unfortunate rainy weather conditions, a Los Angeles rarity. 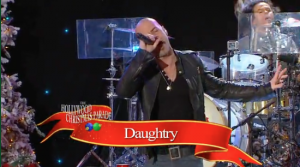 Youth Performing Artists dressed in elaborate costumes and playing festive music. The special groups that participated were as diverse are the garbs they wore. 50 of the 7000 plus members making up the 501st Legion immediately had the crowds cheering as they are an entirely volunteer organization formed for the purpose of bringing together costume enthusiasts under a collective identity. Amongst their ranks were all the Star Wars favorites; Storm Troopers, Jedi Knights, Darth Vader, Sith Lords and even R2 D2 and other droids brought by members of the Rebel Legion and the R2 Builders Club. Watching them made the upcoming Star Wars movie feel all too real. The Air Force Mini-Jet Team was there and it was exactly what the name would lead you to believe, Mini Jets for the purpose of making a difference in the lives of children. They were made up of a group of all-volunteer Sergeants and Airman with kids riding shot gun in the pilot’s seats. 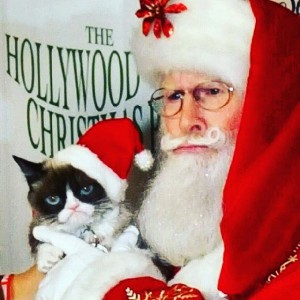 he Grand Marshalls of this year’s parade were the beloved entertainers Penn & Teller whose TV series on Showtime won 13 Emmys and was the network’s longest running show ever. Now they have two successful TV series, both having to do with none other than magic. The co-hosts of the show brought back nostalgic memories of beloved TV shows in the 90’s and before, with Dean Caine, Erik Estrada, Montel Williams, and Laura McKenzie. The parade also featured a stage setup with performances of holiday songs and dance from artists including Clay Aiken; India.Arie; Band of Merrymakers featuring Mark McGrath, Natasha Bedingfield; Tyler Glenn of Neon Trees, Kevin Griffin of Better Than Ezra and Sam Hollander; Daughtry; Diana Degarmo; Kat Graham; Candice Glover; Taylor Hicks; Alexander Jean featuring B.C. Jean and Mark Ballas; Sean Kingston; Heather Russell; Ruben Studdard; and Ace Young.

Celebrities from all mediums of the entertainment industry were out in numbers, from a world famous athlete to Grumpy Cat. Oscar De La Hoya was the biggest star there undoubtedly, known for being an Olympic gold medalist and a 10-time world champion of boxing who has been inducted into the Boxing Hall of Fame. What people might not know about him is he is also a promoter, Grammy-nominated singer, author, businessman and active philanthropist. Grumpy Cat, which due to the Internet and memes was the most recognizable face there and what a face! Most people know her by Grump Cat but Tardar Sauce is the 3 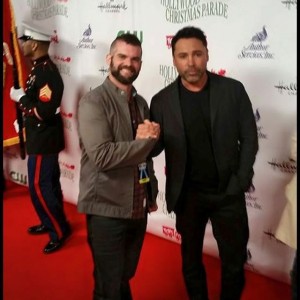 -year old cat that can make any comment or post funnier. Tardar Sauce was recently named Friskies spokes cat and Friskies announced it will be donating up to 10,000 meals to cats in need from December 1st to the 25th.

At any parade there is usually one float that stands out above the others in design or concept, this was the Nebuta float. The Nebuta float was inspired by the popular Nebuta Festival of Aomori Prefecture, one of the largest and most famous festivals in all of Japan that dates back hundreds of years. The float was designed by Japanese Master Artist, Hiroo Takenami, specifically to be showcased here in Los Angeles. Its colorful design was carefully hand-painted and constructed on traditional Japanese washi paper and outfitted with over 3,000 LED lights. This year’s float depicts the “Legend of Yoshitsune,” the story of the celebrated general of the Minamoto clan, Minamoto no Yoshitsune. Sitting on top just two massive wheels and steered by a dozen people, this float was unlike other there. Its beautiful design was accompanied by melodic traditional Japanese music.

The parade will later be televised as a two-hour special on The CW Network on Friday, December 11 at 8:00 p.m. Eastern and Pacific. The Hallmark Channel will air multiple runs beginning Saturday, December 19 on their Hallmark Movies & Mysteries channel. The parade will also air to more than one million American servicemen and women worldwide on American Forces Network.

A true Hollywood tradition that more should make the trip to see at least once. This year’s parade included over 4,000 participants and attracted thousands of viewers on the streets of Hollywood.