For those of you who recognize actor Michael Steger, you’ve probably seen him as Navid Shirazi on the popular television show, 90210. With his 90210 days behind him, Steger has moved on to new projects including Lifetime television movie, Fatal Flip.

Press Pass LA had the opportunity to speak with Steger about his role in Fatal Flip, as well as his other projects to come. Without further adieu, please take a look at our intriguing interview with Michael Steger. 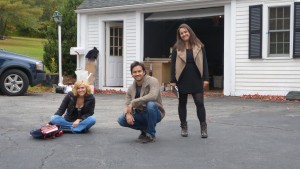 PPLA: Lifetime had a ton of movies on their lineup this summer, including the project you’re currently attached to Fatal Flip. Can you tell us a little bit about this film?

MS: Fatal Flip is about a couple that is still on the rocks in their relationship. My girlfriend is not as committed to the relationship as I am. I’m trying to, you know, salvage the relationship. So, we decide to go in business together, and buy a home, and try to flip it and make money off of it in 45 days.

I’m thinking that this is a great way to save the relationship and maybe she will eventually decide that she wants to marry me. During this process of trying to buy a home and flip it, we get in over our heads and I some how meet a drifter that fixed homes before—and I welcome him into the home. He eventually stays with us and becomes our worst nightmare! So the second half of the movie, we’re trying to get rid of him.

PPLA: In this made-for-television film, you portray Jeff. Can you give us more insight to your character’s role?

MS: Jeff is madly in love with his girlfriend and he is not a risk-taker—he is not someone that would do something like this. By buying and flipping a home in 45 days, this is a huge deal for him. He is a really good guy at heart and he means well—he just really wants to marry his girlfriend!

PPLA: Okay, I can understand that! So, what have you enjoyed most about working on Fatal Flip?

PPLA: That’s great! This film really does feature a great ensemble cast. Do you have any favorite on set moments?

MS: I would say all the action stuff towards the end; it got super physical and crazy. I was pretty impressed by Dominque Swain (Alex); she was doing her own stunts. So, I was just blown away by how into it she was. She was kicking people downstairs—she’s pretty badass.

MS: Yep! There’s a ton of action towards the end. 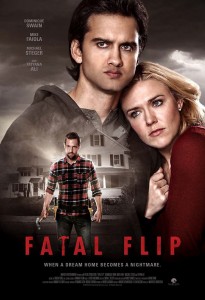 MS: You know what, it was like a privilege and an honor to go to work every day for five years. I do miss everyone—it was like a family, we got see everybody everyday!

PPLA: In your career, you had the opportunity to dabble in directing and producing in addition to acting. Do you prefer doing one to the other?

MS: I definitely prefer acting because it’s a much more fascinating process to delve into a character and work with other actors. For me, as a creative process, it’s a lot more satisfying. But as a director, I am still learning because I didn’t go to school for directing. So, every job that I’ve had has been a huge learning lesson.  I’m still working on that skill.

PPLA: Where did you go for your schooling?

MS: I attended Cal Poly Pomona. I was a bio major and then I got sucked into the theater program! There was a minute there where I’d quit acting.

MS: I thought I was going to be a dentist, but I ended up going back to acting.

PPLA: I’m guessing it was your true passion! Lastly, are there any upcoming projects that you are currently working on that you can tell us about?

MS: I have my web series, Not So Union, with seven episodes coming out in late September. I don’t have a date yet, but it will be out. I just did a film called, Ana Maria in Novela Land and it’s on iTunes. Oh, and I did a film with Shaun Sipos called, “The Babymoon”. That should be coming out in like, a month maybe—who knows when it’s coming!

Make sure to catch Michael Steger in Fatal Flip on the Lifetime Network, August 29! In addition, keep a look out for his web-series—Not So Union—this fall and stay tuned for more of his projects to come.