There are few people in Hollywood that know how  to break boundaries without upsetting the due diligent, politically correct and mass marketed status quo of cinema today. Tom Hanks, and Tom Tykwer, star and director respectively, are two such people.

The two have teamed up to give us a beautiful, and touching motion picture that ponders social boundaries (and religious too) while managing to keep things moving, and all the while entertaining; breaking certain subject boundaries within the story that have been kept off limits by many of the major studios. This picture is the remarkably perky feature film, titled A Hologram For the King, from Roadside Attractions, opening in select theaters this Friday. 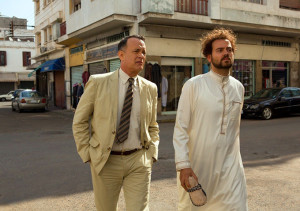 Tom Hanks and Alexander Black break cultural boundaries in A Hologram for the King.

Despite a slightly awkward title (it was adapted by the Dave Eggers’ book of the same name, by director Tykwer) the film acts on a more philosophical level to bring the audiences’ attention to what really exists within culture clash, particularly the differences and similarities between the United States and Saudi Arabia, where the film takes place.

We are introduced on a whim to Alan Clay (Hanks, in a marvelous, and endearing performance) who is the top salesman for a company that has assembled a state of the art holographic teleconference system which will revolutionize meeting standards for the King. Clay is middle-aged, divorced, depressed and set with seemingly more setbacks than there is sand in the Saudi desert, Clay is proverbially faced with himself. Things get fun when he strikes up a friendship with taxi driver Yousef (newcomer Alexander Black, who speeds away with almost every scene he’s in), who acts as a guide for him, and more comprehensive when frequent health scares send him to the hospital, where he meets Muslim doctor Zahra Haken (a poignant and perfectly realized performance by Sarita Shoudhury), who offers perspective on why he’s really there.

A simple character piece, peppered by great performances and one heck of a soundtrack has been arbitrarily patented with gusto and flavor by director Tykwer. He takes the audience back-to-basics in storytelling as he explores the barriers of other cultures. He dares to propose inquiries of moral ethics: Why aren’t we helping other countries in what ways they truly are in need? Is any country that goes out to help another, virtuous in their actions, or rather acting to conform the other into an allied trump card? What is it at the core, that truly separates one culture from the other? These themes of culture clash, and many more of a spiritual nature, are explored on personal levels, as well as the wider.

The rest of the production is no joke either; Director of Photography Frank Griebe photographs the desert, in layers of symbolism, scorching the screen with the beauty of cathartic nothingness, while production designer Uli Hanisch paints a portrait of Saudi Arabia through the Jeddha landscape (where it was effectively shot) that shows it’s newness to the stranger eyes of Clay, while making it as familiar as being at home through characterization. Music from the mind of Johnny Klimek left a slight note to be desired – but the film is an entity of satisfaction with or without it, that there is no real way it can strike a negative chord.

The film is a deep, brimming well, that niche audiences will surely return to in a thirst for experience. It’s a multi layered story that delves to epic complexities; it’s also a love story that breaks ground in execution. So refreshing to have a return to form for such well known Tom-cats, that can remind us what it feels like to see a good, old fashioned movie, and simultaneously stand as a vast example of where films today should be headed – how they should be approached as far as individuals involved, themes, and execution. A great film.

A Hologram For the King runs approximately 97 minutes. It is rated R for language, sexual content, nudity, adult themes, and images of violence.