A Merry Friggin’ Christmas is a strange hybrid of a film and, while not all of it totally works, the bulk of it is different and smart enough to create a good movie.

History will of course remember the film as one of Robin Williams’ last roles before his recent death and it is fitting that he goes out with a bang. As the cranky old father of Boyd Mitchler (Joel McHale), Williams does a fantastic job playing against-type as a truly miserable old man.

MFG starts out like your standard Christmas movie complete with an overly happy father that likes the holiday a little too much and his growing son who is just on the verge of getting too old to believe in Santa. McHale’s character starts out as one-dimensional as it gets but, to both the credit of the movie and the actor, really brings depth to the role by the end.

While the pacing may be hit-and-miss the casting is pretty much dead on and filled with some comedic greats. Everyone from Jeffrey Tambor to Clarke Duke and Candice Bergen co-star and each has their moment to shine. This is the debut of writer Michael Brown and he shows some real chops for witty dialogue and would probably be great outside of a genre that isn’t so naturally constricting. 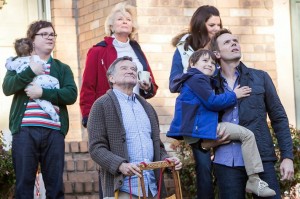 Still, one can’t help but feel that the movie is holding back. With its edgy cast and snappy dialogue it seems to really want to be a spiritual sequel to Bad Santa. So much so that it even cast Lauren Graham in a supporting role. But it’s just not given enough freedom and it shows. That’s not saying the movie is bad at all, but it has the potential to be so much better.

A Merry Friggin Christmas will be released in theaters and VOD on November 7th.