Aaron Paul is quickly climbing a rhinestone star laden ladder in Hollywood these days. Since his ferocious breakout in the famed AMC TV series Breaking Bad, Paul has accrued more hours on his resume than he must seemingly know what to do with.

He’s a co-producer and star of the wildly popular Netflix series BoJack Horseman, in addition to headlining some premium theatrical ventures, such as Central Intelligence, with Dwayne ‘The Rock’ Johnson, that are aligning multiplex screens even as we speak. He is clearly a craftsman dedicated to the moment, and the new picture he headlines for Saban Films, called Come and Find Me, is another direct example of this.

Released this past week, and helmed by Zach Whedon (brother of television Icon Joss), the movie tells the story of David (Paul) a simple, boy next door living on the outskirts of the Los Angeles area, who enjoys a seemingly healthy relationship with his girl Claire (decent job by English actress Annabelle Wallis). One morning, quite unexpectedly, Claire goes MIA, and no cell phone tracking device, nor missing person’s report, manages to provide an answer to her whereabouts.

From here, a journey of tortuous proportions, with an endless array of false identities and masked characters infiltrate the story to tease, to misguide, to ultimately attempt to halt David from trying to figure out what’s happened to Claire. As he descends further to the truth, it becomes apparent that Claire had many, many secrets, which if known, could cost David his life.

It’s a pretty simple story, with no real bells or whistles to promote in flashy PR material, and yet  it’s this simplicity which allows audiences to take this journey. The nuances in David and Claire’s relationship, their day jobs and how they get by as young adults, how they interact when each of them comes home at the end of the day, are all accessible, forthright glances into our own lives. These characters are excitedly relatable, especially Paul’s fine turn as David, tough when he needs to be, totally vulnerable the rest of the time. A good role for him. 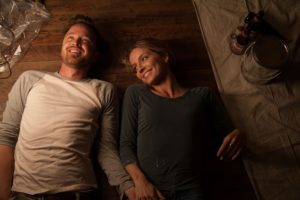 Aaron Paul continues his streak of fascinating roles with Come and Find Me.

He carries the film well on his shoulders, with  help from co-stars Garrett Dillahunt, Terry Chen, Dean Redman, and Zachary Knighton – who personifies the true definition of a classic supporting actor; In his precious few moments onscreen – he easily subterfuges Paul’s mast and takes the scene for himself. If he keeps up this kind of good work, he’ll go very far. He has that old fashioned magical something-something about him that makes you pay attention.

The script is written by Whedon, who is making his directorial debut here. It’s got all the aplomb and emotional verve you’d expect from a Whedon, replete with social relevance, churning plot twists, and cautious structure. However, he fails to bring out any real sense of danger for all he’s given us. It seems at times, that his consistencies were spent on polishing the look of the film instead of delivering us totally unawares to a rendered unnerved experience. That’s what the film needed, and only appears slightly below the surface. This shouldn’t be a problem for the first time director. It’s clear Whedon is sifting through this first venture, to greater waters.

It would be easy to conclude that elements of a vision for this tale are just as missing as the lead heroin, but when it all comes down, Come and Find Me acts as a representation of where the film industry seems to be heading. It’s a deft exploration into mystery and absolution and, while playing it too safe and tame, provides a nonetheless (somewhat) satisfying experience, that should bring Saban Films some recognition to continue to progress as a feature film company, and keep Aaron Paul on the rise he’s embarking on.