When you think AARP, you might not think Hollywood. But if that’s the case, then you don’t know AARP!  Press Pass LA had the chance to attend this year’s second annual Movies for Grownups Film Showcase  at Regal Cinemas, L.A. LIVE. The event featured 10 films over four days celebrating the 50+ moviegoer.

Attendees had the opportunity to see some of this year’s most buzzed-about films (many before their release date in theaters!)  with themes catered to an adult audience.  The films shown are currently being considered by AARP editors for the upcoming 2015 Movies for Grownups Awards gala which will also take place in Los Angeles on February 2nd.

The best part about this film showcase is that unlike many exclusive film festivals, this opportunity is available to the general public. This year’s lineup included advanced screenings of  Wild, The Imitation Game, The Humbling, The Judge, The Theory of Everything, Whiplash, as well as documentaries I Am Ali and Banner on the Moon. There was even a last minute special addition of Kevin Costner’s film Black or White, with Costner on hand to answer questions and greet the audience!  In fact, following each screening, viewers had the opportunity to stay for an exclusive Q & A session featuring filmmakers and cast members of the film at no cost.  These guests included actors Al Pacino (The Humbling), Valerie Harper (Banner on the Moon), Laura Dern (Wild), Eddie Redmayne and Felicity Jones (The Theory of Everything), and J.K. Simmons (Whiplash) along with filmmakers James Marsh (The Theory of Everything), Damien Chazelle (Whiplash), and Mortem Tyldum (The Imitation Game). 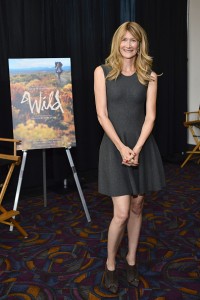 I was able to attend the screening of Wild which featured a standout performance from Laura Dern that has already drawn well-deserved whispers of a nomination for her this awards season. Dern played the mother to Reese Witherspoon’s portrayal of Cheryl Strayed. Wild is based on the novel detailing the true story of Strayed, a woman who decides to hike the challenging Pacific Crest Trail after the death of her beloved mother and self-destruction of her marriage. The film was beautifully shot by Director Jean-Marc Vallee and left the audience in awe of the performances, the landscape, and this mother-daughter love story. The Q & A with both Laura Dern and Producer Bruna Papandrea shed light on the relationship the actors had with Cheryl Strayed who opened her home and her history to the actors and crew, and who was a fixture on set. In fact,  Cheryl’s real life daughter played the younger version of her in the film and got to learn about her grandmother through working with Dern. Dern spoke about this unique relationship as well as about the perks of working with a French Director and handling awards buzz.

We can’t wait to see which films take home the accolades at the AARP awards in February!