ABC’S THE GREATEST HITS’ TO KICK OFF WITH PERFORMANCES BY PITBULL, REO SPEEDWAGON & MORE

The series premiere of ABC’s new unscripted singing show hosted by Arsenio Hall and Kelsea Ballerini will kick off the six-week music event with chart toppers from 1980-1985, with performances by Pitbull, REO Speedwagon, Jason Derulo and more.

The series will feature iconic music artists and current chart-toppers performing hits from the 1980s, 1990s and 2000s. Each episode will focus on a five-year period in time and feature duets, tributes and solo performances. The show is produced by AEG Ehrlich Ventures and Leon Knoles will direct the show, with David Wild serving as writer and producer.

The premiere episode will showcase some of the greatest hits from the early ‘80s, including a duet with REO Speedwagon and Pitbull, and a special tribute to Michael Jackson performed by Jason Derulo. Here’s the full set list which includes music from Kenny Loggins, Rick Springfield, Kim Carnes, Ray Parker Jr. and Kool & The Gang:
Musical performances from 1980-1985 include:

REO Speedwagon performs “Keep On Loving You” and a duet with Pitbull performing “Messin’ Around”
Ray Parker Jr. – “Ghostbusters” 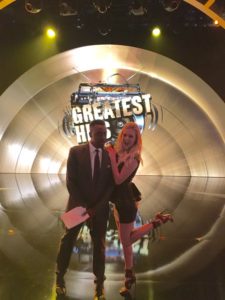 Kool & The Gang – “Celebration”
“Greatest Hits” is produced by AEG Ehrlich Ventures. Ken Ehrlich, James McKinlay and Raj Kapoor serve as executive producers and Leon Knoles directs. David Wild is writer/producer.
Host Arsenio Hall came to fame in his late-night series “The Arsenio Hall Show,” (1989 – 1994) which was briefly revived in 2013 following his appearance on “The Celebrity Apprentice.” Ballerini is a country-music artist who was named this year’s New Female Vocalist at the ACM Awards. Her hit single “Peter Pan” is out now and her album from Black River Entertainment is titled “The First Time.”