ALL ABOARD: LA’S FASHION PLATFORM 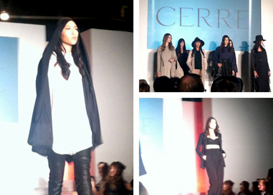 With so many fashion shows going on for LA Fashion Week, it was refreshing to see one benefitting a good cause. The Fashion Business, Inc. presented “All Aboard: LA’s Fashion Platform” at the beautiful Union Station in the Concourse Ticketing Hall. The organization offers programs and educational resources to up and coming fashion designers.

The event started with a reception in the outside courtyard where sponsors were set up offering wine, dance performances and music. The sold out event offered so much more than just a typical runway show. Guests were treated to singing and dance performances, a spoken word light show and even cheerleaders! The event was hosted by comedian, Brett Walkow and Melissa Rivers (Exective Producer of E! Fashion Police, Star of Joan & Melissa: Joan Knows Best). In addition to hosting, Melissa Rivers presented her fashion line, “Melissa Rivers for The Cool People” that is sold exclusively on Zappos.com.

We talked to Melissa on the red carpet and she told us, “I wanted things I could wear. I’m running to and fro and everywhere. It’s very versatile, classic shapes. Everyone jokes saying who does it fit and I say it’s 16-60. You can make anything conservative. My mom has been wearing it non-stop!” Everything in the line is under $100 and a portion of the proceeds go to The Waterkeeper Alliance, a charity that Melissa is involved in. The clothes looked great on the runway!