ACCEPTANCE REUNITES WITH A SHOW AT THE OBSERVATORY

A packed room full of men and women of all ages anxiously await the return of their favorite band. In 2006, a year after their debut album “Phantoms” was released, Acceptance broke apart leaving hearts shattered. Luckily for their fans, on January 26th, 2015 they announced that they had reunited.

On July 27th the Observatory was filled with fans, friends, and family to support this incredible news. Money Pit was the opening act consisting of Nic Newsham and Bobby Darling. They played their new single, “I Want My Money Back” which was definitely a crowd favorite and wooed the crowd with their charm.

Next up was Emarosa, a band from Kentucky formed in 2006. The lead singer, Bradley Walden, played a heavy hand in the reunion of Acceptance. Having been a fan for quite some time Bradley reached out to Jason (lead singer of Acceptance) and expressed his gratitude and love for their music. Emarosa played hit songs such as “People Like Me, We Just Don’t Play” and “Gold Dust” off of their album Versus. 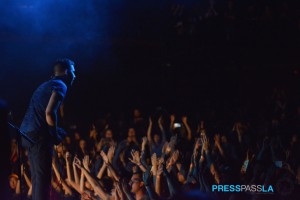 Finally, Acceptance took the stage. The band consists of Jason, Christian, Kaylan, Garrett, Ryan, and Nick. They performed classic hits such as “So Contagious,” “Over You,” and “Take Cover.” Everyone in the crowd was singing along, jumping, and feeling revived as the moment they had been waiting for for almost ten years had finally became a reality.