We sat down with actor-producer Sterling Jones to talk about how he’s using Instagram videos to build a name for himself in Hollywood in between shooting network TV and feature films like “Lone Survivor.”

Every actor’s dream is to be what we in Hollywood call “a working actor.” But for those of us in the business, we know all too well how elusive and often times, out of your control, getting paid to work consistently at your craft can be. It’s not like any other career path, and it’s not for the thin-skinned or fame-seekers.

Today’s newcomers realize that even when they are booking  TV gigs like NCIS or films opposite stars like Mark Wahlberg, they must consistently being working to take their careers into their own hands. Luckily, technology and social media has made this more achievable than ever.

We sat down with rising star and multi-talented funnyman, Sterling Jones, to discuss how he’s using his online presence to make people laugh, and booking leading roles along the way!

PPLA: What brought you out to Hollywood and when did you first know you wanted to be an actor/performer?

SJ: I came out to L.A. to pursue acting and chase THE DREAM.  I knew I wanted to be an actor very early on in life.  I did a Christmas play in 3rd grade and I remember walking off stage and being like, whoa, what was that??  I wanted to do it again and again.  Then in high school, I was in the visual media class and developed our very small town’s first news program.  I was the anchor 🙂  Subconsciously I think I had figured out, if I can make people laugh, then they would be less likely to make fun of me.  Now thats deeeeep.

PPLA: Did you ever have any moments where you really wanted to give up- what kept you going?

SJ: I can honesty say that I have never wanted to give up,  I have had moments where the business doesn’t make sense and I would be perplexed and confused, but I never made it about me.  I just know if I can just keep getting out of bed an 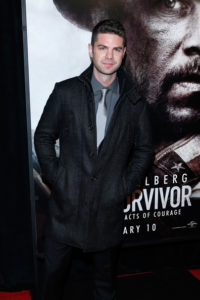 d aim to do one thing creative a day, I was winning.  I would say my family is what keeps me going.  They are my biggest fans and have never doubted my potential or suggested another career path.  When the biz knocks me down, I always realize that I have an amazing group of friends and family waiting to help me get back up.  It is by far the best gift I’ve ever been given.

PPLA: What are some of the TV/film projects you’ve worked on? Any favorite characters you got to play or actors you’ve collaborated with?

SJ: Working on Lone Survivor was definitely a high point.  Being around those heavy hitting pro’s taught me so much.  The movie itself was so powerful, I still get messages form strangers, very touching.  Favorite characters… hmm, I did enjoy playing Vince in the play TAPE by Stephen Belber.  That character is all over the place, a total mess, so fun.  Also, my character in my feature that’s out now, called The Morning After, he was a total d-bag, but again, so fun.

SJ: No question, Leslie Nielson in Naked Gun.  I want to do the reboot of Naked Gun soooooo bad.  And what actor do I want to work with?  Meryl.

PPLA: You recently started making comedy videos on social media that are getting a lot of attention. How /why did you decide to start doing this? Were you surprised by the reaction?

SJ: YES!  The insta vids, who knew!  Me and my buddy Collier Goode, shot our first instagram video less than a year ago and since then, WOW.  As an actor, there are times when you’re not working.  Of course the goal is to work all day everyday, but that’s not reality.  So in between gigs, we started shooting little 15 second instagram videos that we thought would make people laugh.  Then instagram started allowing 1 min videos which opened the door to even better opportunities to try and make people laugh.  Overall, I am very surprised of the positive response I have received from the videos.  I can do a big guest star on a major TV network and I’ll have a few people say, ‘Hey, I saw you on TV”, but then i’ll post an insta video and I have a ton of people commenting and saying thew saw my video and how funny it is.  It is strange how media is changing so fast.  It’s kind of the wild west right now in terms of creating your own content and becoming your own “channel”.  Although I don’t have that many followers compared to some, other instragram users  share my videos and sometimes they are seen by millions of people.  So as long as I’m still getting positive feedback, i’ll keep making them.

PPLA: What opportunities have come from this?

SJ: I have had several people, very talented and even big names (like Kate Walsh featured above), reach out to me wanting to make videos with me.  It’s the ultimate compliment.

PPLA: Do you have any advice for other aspiring actors or content creators?

SJ: My advice for actors: No longer see yourself as just an actor.  Every actor has the talent to either direct, write, or produce, perhaps maybe all three.  And now days with iPhones having amazing cameras, there is truly no excuse every actor shouldn’t be creating their own content while waiting for their agent to call.

PPLA: What’s next for Sterling?

SJ: I have a horror film coming out called Hide in the Light, super scary and I’m very excited for people to see it.  I have another film called The Morning After, which I mentioned, that is becoming available on NETFLIX next month.  I’m acting in and producing two features coming up, one called Rehab, which is going to be AMAZING and the other I can’t talk about, yet, hehe.   Also, developing a FACEBOOK LIVE show, which I get to just be myself and do my thing, which could possibly be career ending HA!

Favorite place to relax in LA:

Tortilla Republic West Hollywood, best spot in town and has been for years.

Superstitions or rituals before auditions:

I can fly airplanes!  I’m a pilot, lots of people don’t know that about me 🙂

What’s on you iPod right now: