Whether you have spotted her on HBO’s The Newsroom or on DirectTV’s hit show Kingdom alongside Nick Jonas, Santana Dempsey is an actress on the rise. Her latest projects include the series Life’s A Drag and the film French Dirty premiering at the Los Angeles Film Festival June 11th.

She also recently completed the film  Megachurch which aired this Spring on Lifetime, alongside Corbin Blue and Lil Romeo.

Press Pass LA sat down with Santana to talk about her journey as an actress.

PPLA: What made you want to pursue acting out here as opposed to New York?

SD: I did not see myself on Broadway. I see more people that look like me in TV and film and they are more open minded. There was not enough going on in New York. I came out very business-minded and I wanted to start fresh, and I wanted to really be in the game. Most of my actor friends in New York just get by all the time, and that’s great, but I wanted to be something bigger and risk it.

PPLA: Can you talk about the different shows you have been in and what kind of experience that was?

SD: Aaron Sorkin is amazing first off and his writing is amazing. It is one the hottest shows. I don’t think people understand how challenging it is to be an actor and to get into the room and audition for something. They weed so many people out to get the audition and for The Newsroom it was the last season and everyone wants to be in it. It’s HBO, one of the hottest networks to be on and it’s Aaron Sorkin and it was a dream come true for me. He was amazing. He really didn’t talk much, he is a little intimidating and he knows exactly what he wants, so, you have to be prepared for that. The director of the show was Anthony Hemmingway. He is an up and coming director and he was so gracious to me and all the cast members were great. 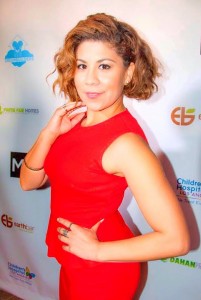 PPLA: What motivates you as an actress?

SD: Mark Ruffalo had 600 auditions before he had a big break. I want to inspire other people cause I am adopted and I am mixed race and a big women’s rights advocate. and I want to use acting as a platform to have a voice and be an advocate for people.

PPLA: What do you want to accomplish in your career?

SD: I want to do something on this Earth that was bigger than myself. What you do with acting itself can make it bigger.

PPLA: What are you currently working on?

SD:  The film French Dirty which premieres at the Los Angeles Film Festival this June and the series Life’s A Drag which follows a down on his luck artist who turns to drag to make ends meet. (Watch the trailer above)