Broken Horses is a fascinating film on so many levels that it almost demands multiple viewings. You might not expect something like that given the plot, which in itself sounds rather generic.

The film revolves around Jacob Heckum (Anton Yelchin) a musical prodigy that has left behind his barren Texas hometown for New York and a new life. But the past is never far behind. After years of being apart his mentally disabled older brother Buddy (Chris Marquette) invites him back home to give him his wedding gift. Giving away any more would be a crime. 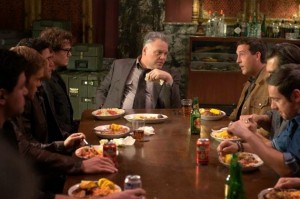 The film toys with movie archetypes and totally flips them on their head.  There are plenty of heroes and villains but much of it exists in a moral gray area. Even the ruthless villain (Vincent D’Onofrio) shows tenderness toward Buddy that, while manipulative, you can tell truly comes from the heart.

While the pacing can sometimes feel off one has to hand it to Vidhu Vinod Chopra for working well outside of his comfort zone. The film marks the first time an Indian filmmaker has written, directed and produced a Hollywood movie. You would never know it by the final result. With stark landscapes and an eye for beautiful cinematography Chopra creates a realistic modern Western with no easy answers.

Of course it’s far from a perfect film, but for the most part when it works it really works. Casting Chris Marquette as Buddy was a stroke of genius. As the mentally disabled hitman Marquette brings serious gravitas to the role. D’Onofrio is firing on all cylinders as well chewing up scenery as the deep-Texas mobster who has given Buddy a new family.

The fact that Buddy is disabled is never once played for dramatic effect. Chopra turns what could have easily been a clichéd character into a complex, layered role that respects Buddy as a person. The fact that he is disabled plays into the plot but is never really brought up.  That needs to be commended.

Sadly Broken Horses will only be getting a limited release but it is without a doubt one that should be sought out.