The Harvest is one of those rare suspense movies that is more substance than flash. In the age of jump scares and CGI everything it ends up being quite refreshing to watch.

The story itself is rather simple. A young, dying boy (Charlie Tahan) is stuck at home due to his medical condition and barely leaves the house. One day a curious young girl (Natasha Calis) visits him and the two spark a friendship. That one simple act sparks off a series of events that tear the boy’s world apart.

There is virtually no blood in the movie but that doesn’t stop it from being one the most unsettling films of the past decade. Much of that is due to that Samantha Morton’s amazing performance as an unhinged and overprotective mother. Comparisons to Kathy Bates in Misery are well deserved though it is possible Morton is even more frightening. 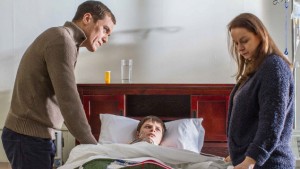 Samantha Morton and Michael Shannon star in The Harvest.

Despite its straight forward premise there are plenty of surprises beneath the surface of The Harvest. This is a film that trust its audience enough to let them piece together the information being presented to them rather than having it spoon fed through exposition.

If there is a weak point it comes from the supporting characters. The young girl, Maryann, lives with her grandparents played by Peter Fonda and Leslie Lyles. While both are competent actors they seem to be on autopilot through most of their scenes. Indeed, Fonda is given the chance to say “far out!” twice in the script, because he can. Their roles are necessary but could have easily been cut down for the sake of furthering the story along.

Under normal circumstances this could have easily been a made for TV movie. But under the direction of John McNaughton (Wild Things, Henry: Portrait of a Serial Killer) it becomes something far more fascinating. Shot entirely on film and using an orchestral score that would make Hitchcock proud the suspense slowly builds in a way that completely envelops the audience.

Still, it is a slow burn. A few decades ago The Harvest would have been a major release with the potential to become a cult film. Instead it is relegated to a limited release that few too will see.

The Harvest opens at the Arena Cinema in Hollywood on April 24 and is currently available on VOD.