ADVANCE REVIEW: WELCOME TO ME, KRISTEN WIIG IS OUR FAV MILLIONAIRE

You can literally hand Kristen Wiig any role where she has to throw a tantrum, act psycho or mental with a hint of comedy and she will knock it out of the park. Warning: this review contains spoilers.

Welcome to Me is a dark comedy with a unique cast. From start to finish the film either had you laughing or covering your mouth out of shock.There was a lot of nudity (full frontal), sexually implied comments and sexual scenes.  Be warned that this film is not for anybody under the age of thirteen.

The film follows Alice Klieg (Kristen Wiig) who has suffered her entire life with borderline personality disorder. She can get very emotional at different times and go from one extreme to another. This makes her quite quirky and eccentric. She loves pudding, can’t stop playing the lottery and is obsessed with Oprah Winfrey.

In one of her usual visits to the market, she picks up her usual lottery ticket. While sitting on the couch eating her pudding and watching the lottery numbers she discovers that she has won $86 million dollars. That is when her whole life  changes.

Once she gets her money she goes out on a limb and stops using her medication. With nothing in her way and no medications to hold her back she moves into a casino and becomes the new host of a TV show of her own design. 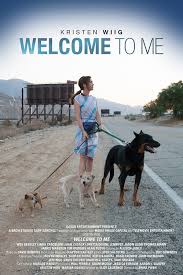 With no one to tell her no she decides on 100 episodes for a series called “Welcome To Me,” a show literally all about her and her life and all the ways people have hurt her in her life.Although she has some wild ideas and demands, they keep her on the air because she’s loaded and because she eventually gets a group of fans and good ratings that even beat out The Fresh Prince of Bel-Air.

Throughout her show Alice puts a lot of people down, cheats and has a complete breakdown all of which are insanely fascinating with Wiig at the healm.

I really enjoyed this movie and  Wiig has become my new favorite actress. The girl can do anything. I loved the entire cast which included James Marsden, Joan Cusack, Wes Bentley, Tim Robbins, Jennifer Jason Leigh and Linda Cardellini. This movie is a definite must see and I can see it taking home a lot of awards in the future.

This film opens May 1st, watch the trailer here.