Big Hero 6 is a defining movie not just for Disney and Marvel, which teamed together to make the film, but for animated movies in general. The story is never once dumbed down or sugar coated and that results in a truly glorious film that is going to be making waves for a long time to come. 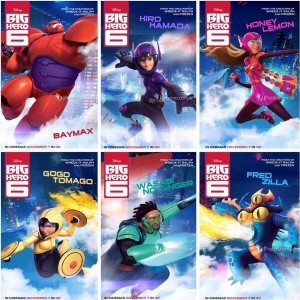 The movie revolves around Hiro Hamada (Ryan Potter) a boy genius with a passion for robotics and fighting, something common in the city of San Fransokyo, an alternate world where America and Japan not only became allies but seem to share a common culture. Though a child prodigy he’s been more than a little reckless and hasn’t quite come to terms with his parents disappearing when he was just three years old. As a result he’s become quite the hustler in underground bot fighting. This is all within the first 10 minutes.

Fed up with constantly bailing him out, his cousin Tadashi (Daniel Henney) shows him his “nerd lab” at the university where he is employed. It’s here where the movie really shines and in a matter of minutes it not only introduces most of its main characters but almost single-handedly nails what it’s ACTUALLY like to be a nerd. For those not in the nerd/geek community there is quite a bit of dissent against shows like Big Bang Theory that seem to thrive on what the stereotype of a geek is supposed to be rather than what it means to actually be one. But Big Hero 6 gets it right and not only treats its characters with respect but puts its focus on intellectualism turning a group of tech geeks into full-fledged superheroes.

Those are just the humans. Some of the film’s greatest moments come from Baymax (Scott Adsit), a medical assistant robot designed by Tadashi that ends up become a central figure. Adsit’s deadpan readings as Baymax create some truly laugh out loud moments as well as a few that will make you tear up.

It is to the credit of both Marvel and Disney that they chose this film as their first animated venture. Both companies have a firm grasp on the genre but together they have elevated it to a whole new level that is right up there with Pixar in its prime (Since Pixar is now under the Disney umbrella this isn’t too much of a surprise). There is so much going on in the universe that the movie sets up, and all of it handled amazingly well, that it is hard not to believe that Disney is now playing chess while everyone else is struggling with checkers.

Given that this is a Marvel movie audiences should make sure to stay until the very end for a great post-credits sequence and some amazing animation during the credits itself. The Big Hero 6 universe is just ripe to be explored further, here’s hoping the company puts together either an animated TV show or a sequel soon.