Gotham, the newest television show from DC Comics, has the potential to be the next great crime series. The studio proves once again that while it may falter when it comes to movies, it knows how to shine on the small screen. 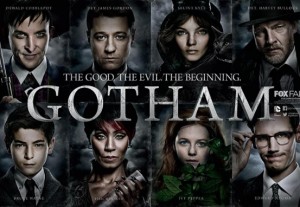 Taking place almost 20 years before Batman’s first appearance the show follows rookie cop Jim Gordon (Ben McKenzie) and his crooked partner Detective Harvey Bullock (Donal Logue) as they investigate homicides and corruption in Gotham City. Since this is pre-Batman viewers are seeing the city at its absolute worst, and it shows. Crime runs rampant  as the city has become a playground for mobsters, felons, rapists and feuding criminal kingpins.

Stylistically the show owes a lot of Nolan’s version of the Batman universe. It is dark, gritty and for the most part ultra-realistic. Fresh out of the gate the show makes it clear that while it may take place in a comic book universe it is in no way a children’s program. Within the first five minutes the viewer watches the death of the Wayne family, setting in motion events that will change the lives of everyone involved. The trick though, is that while the investigation may focus on the murder of Thomas and Martha Wayne, a young Bruce Wayne (David Mazouz) is all but pushed aside for the bulk of the episode. This show isn’t about Batman, but creating the world he will inhabit.

“This is both a procedural and a serial,” Corey Michael Smith, who plays an early version of The Riddler on the show, explained to a packed audience this weekend at the premiere in Chicago. “I don’t think you’ve ever seen anything like this on television,” he noted.

That means the show has a lot of world building to in a short amount of time and it does it exceedingly well. Much like Smallville the show takes pre-existing mythology and twists it into a new timeline. The city is still run by mob boss Carmine Falcone but he remains in the shadows. It is his second in command, Fish Mooney (Jada Pickett Smith) that runs the show. Casting Smith was a masterful move and she is without a doubt one of the best parts of the pilot. Though she doesn’t have that many scenes she manages to chew the scenery like a master and become a powerhouse.

Indeed, it is the secondary characters that tend to steal the spotlight. For instance, Bruce’s loyal butler Alfred Pennyworth (Sean Pertwee) is typically viewed as nothing but a strong father figure for young Bruce. But in the context of Gotham, Alfred shows a fierce protection over the Wayne family and hints that he is so much more.

The one weak link in the cast seems to be McKenzie’s version of Gordon. Granted, this is only the first episode and those are never perfect, but McKenzie plays him so stoically that he lacks depth. Since he is the rookie and new in town the writers have clearly chosen him to be the audience surrogate, hence his blandness. Considering he’s the main character though that is going to have to change quickly to move the show along. 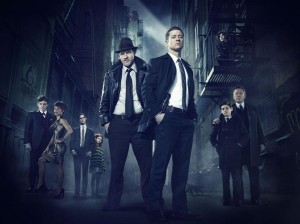 Moving the timeline back at least a decade allows the writers to tell some truly fascinating stories and show the evolution of both the heroes and villains of Gotham City. Let’s hope FOX, notorious for cancelling ambitious shows, gives them the creative room that it needs to explore that territory.