ADVANCED REVIEW: INTO THE WOODS

Disney’s Into The Woods can only be described as new take on classic fairytales that offers an underlying theme of wish fulfillment and its consequences. It is a musical, family friendly film with an all-star cast including Meryl Streep, Anna Kendrick, Johnny Depp and Emily Blunt.

The movie entwines the plots of four Brothers Grimm fairytales: Little Red Riding Hood, Jack and the Beanstalk, Rapunzel and Cinderella. The film follows a baker and his wife in their quest to fulfill their wish for a child by retrieving four items for their neighbor witch. The Witch has promised to lift the curse she put on the couple’s home which makes it impossible for them to have children. The Witch initially put the curse on the house after the Baker’s dad stole from her garden. She really loves her garden.

The couple begins searching for the items that lead them to the other protagonists in the film. They must fetch a cape as red as blood, a cow as white as snow, hair as yellow as corn and a shoe worth as much as gold. As you can probably guess, they retrieve the cape from Little Red Riding Hood and the shoe from Cinderella. The cow comes from Jack, played by Daniel Huttlestone whom was the standout star in this film. He has so much musical talent, and he’s only 15 years old.

Another theme prevalent in the film is that of family, more specifically parent and child. The Witch is over-protective of her daughter, so much so that she has locked her away in a tower with no way out. They have a rocky relationship in the film but it’s easy to see that the Witch loves her daughter and she had good intentions with every decision she made. The Baker is upset with his father for abandoning him and almost makes the same mistake with his son. He consistently battles his inner thoughts that tell him he will not be a good father because he didn’t have a good father. Jack and his mother have a less emotional conflict, more physical. Jack’s mother is constantly annoyed with her son and his decision-making skills, which often leads to a smack of Jack’s head. Lastly, Cinderella looks to her deceased mother for guidance whenever she needs help making an important decision.

This film has a two-part feel to it. Part one concludes with an almost happily-ever-after, and what ensues in part two is a whole different ballgame. Part two brought realness to an otherwise picture-perfect telling of these beloved fairytales. Part two showed the protagonists weaknesses, some overcame their weaknesses, and some didn’t. The film highlighted the fact that people make mistakes and deserve forgiveness. 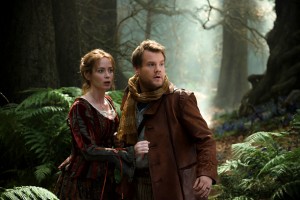 The princes, played by Chris Pine and Billy Magnussen, made the entire audience laugh every time they came on the screen. Their character’s over-the-top performances and vain personalities added so much humor to the film.

If you love musicals, fairytales and plot twists, this movie is for you. It’s a perfect uplifting, fun, gamily film to watch over the holidays.