For 80s kids the original film “Adventures in Babysitting” (1987) starring Elizabeth Shue was a classic! This week, Disney Channel Original Movies celebrated a red carpet in honor of their 100th title in the blockbuster movie franchise, a remake of the same name, which debuts this Friday, June 24th.

The re-imagined version of “Adventures in Babysitting” features a cast ranging in age from 14-23, with most never having seen the original film until they claimed their latest roles! 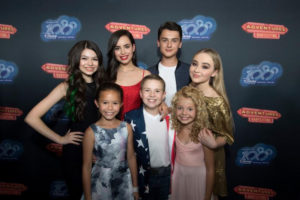 Show your support on social media by using #AdventuresinBabysitting #100DCOMs!

The remake marks a huge milestone for the Disney Channel, as it’s the network’s 100th original movie. Leading up to tonight’s big premiere, Disney has been celebrating all the classic original movies that came before it (think Zenon, Smart House, and High School Musical) with a massive marathon, airing all 99 since kicking the celebration off this past Memorial Day weekend and giving us the nostalgia overload we so deserved.