THE AFGHAN WHIGS & OUTKAST MAKE A MIGHTY RETURN FOR COACHELLA

When the music takes on a life of its own and has survived those turmoiled years rife with hardships and poisoned popularity, great bands tend to stand and transcend the tests that is American Popular culture. Some artists, do it with such a grace it that makes us love them more for their ardent contributions to art in the face of such demand.

While other’s allow the same kind of fervor and demand to mold their lives outside their careers into a life of its own in that cat and mouse game of celebrity riddled with court dates, sex-tapes and on occasion, stints in rehab. In either case, we the people, cannot get enough. The Star Spangled Banner of bashing the human on stage. The consumption with gumption. The society of the proprietor’s propriety. Luckily for us, there are bands who just stick it out through all of this, and come back stronger….and that it what makes this consumer, happy. Great examples of the former and not the latter are two groups who have been through the love and the questions of direction only to come back and play amazing shows, with one headlining Coachella. So, in part two of our “Coachella Previews Trilogy,” we’re going to explore the bands that came back together to give us great music, again. Starting with The Afghan Whigs, and ending with OutKast.

The Afghan Whigs started out as a quick pitched fastball garage punk band that caught some breaks during their grunge era. They evolved from one of the original member’s previous band, The Black Republicans and quickly made their names known around town. Flash forward fifteen years and you’d see that The Afghan Whigs evolved further still pumping out their Punk pushes saturated with R&B/Soul riffs rolled with Funk and Psychedelia. But ultimately, the squeeze of the game and time away from their families made the juice of the music not worth the work anymore. So, after three labels and six influential albums later, The Afghan Whigs decided that it was time to call it quits.

Five years after that the band did two tracks for their last label on a greatest hits-ish kind of album, but then as quickly as the came, they again disappeared. They popped up from time to time after that, but nothing was the same until…Society came-a-calling…..HARD. The Afghan Whigs had done several covers, which they were known to do in the past, but these were different. Their covers were getting radio play again, at least, they were here in LA. They were covering contemporaries again, but not “Then” contemporaries, “Now” contemporaries. They were instilling their black humor and grunge riffs with the smoothness of a razors edge being vibrated by a R&B-like pocket playing into a new generation. Then of course, came the announcement. The band was gathering and recording new material. Could it be? Yes, yes, YES! The heavens had opened up, the label’s wallets had loosened, the families had given their blessing and The Afghan Whigs rode again!

Now, in 2014, after a couple years of writing, playing offhand shows, Festivals and re-touring, they’re taking their talents to SoCal at The Coachella MusicFest in support of Do to the Beast, their new album due out the week after Coachella and the first one in 16 years. Even if it’s without Rick McCollum, THEY ARE BACK! 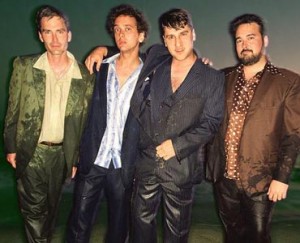 Outliers, Headliners, Return of the G’s

Right from the get go when the announcement of dates and headliners came out about Coachella, the music world was clamoring. OutKast, the Atlanta raised duo of Andre 3000 and Big Boi, came from the humbled beginnings of being over looked in a rap game that cared nothing for their sound, and everything about their look. Each with their own individual style and delivery, these two have made their mark in a career that has spanned over a timeline of 22 years in rap, in which they went from being the weirdos from the South, to the media darlings of “what will they do next?” They have won Grammy’s, made movies, and launched careers. The have given credence to an entire region of music makers in the Southeast, and now the time has come for them to collect on their legacy.

The anticipation has been killing fans for years. They were due for a new album after a sweat filled hiatus from their 2006 release of Idlewild, until now. Soon after being named the headliners of this years Coachella it was apparent that the group wanted to be at the peak of their game, when they released a series of tour dates in which they were to be included as headliners, or special guests in other music festivals around the world to tighten up their sound and refine their sets before Hip Hops day of reckoning.

Now, the world holds their collective breath as they begin to speculate on whether the boys decide to give a new album a go, or leave us all waiting…again. Only a few years ago, the thought were that an album announcement was imminent after Big Boi dropped an underrated solo album named Sir Lucious Left Foot: Son of Chico Dusty, in which there were 2 tracks recorded by Andre 3000 and Big Boi that had to be dropped from the solo album because Jive records argued that even a solo work by Big Boi, with Andre 3000 as a guest feature, is still considered an “OutKast” release and therefore property of Jive. The album was subsequently released, but without the tracks that everyone wanted to hear, which were later leaked anyway. Big Boi continues to work on his second solo album, Daddy Fat Sax: Soul Funk Crusaders.

Then came the years of anticipation for an Andre 3000’s solo work, which alas, never came. Leaked solo songs were offered to the public, all of which were gobbled up, but none of which amounted to a full fledge album. The public thought his influx of guest appearances on other rapper’s albums not only signaled his entrance back into the rap game, but a sure fired flare that an album of some sorts was coming. Then, Andre 3K decided to add to his acting repertoire by portraying Jimi Hendrix in an upcoming biopic, shelving the talk about any album work, solo or as a group.

Until then, let us all collectively enjoy the fact that OutKast is back together and hitting the main stage at Coachella, and since they’re playing so many shows before Coachella, it makes me wonder what they have up their sleeves for their first weekend and beyond….because as of a few days ago, Outkast is sharing the headlining stage with Eminem at Lollapalooza.

So, there you have it. We’ve gone from ten bands to look out for, to two bands you know, that are keeping their careers going at Coachella. So, stay tuned to the part three of this Coachella preview piece, where we’ll highlight the parties and their people. Starting with a PPLA favorite, The Neon Carnival.