AFTER THE FALL, MOVIE REVIEW

Drawing from the well of “suburban dad backed against the wall and with nothing left to lose,” After the Fall is a powerful study of masculinity and power through the backdrop of how men can provide for their families when they’re out of options.

At the forefront of this are Bill and Susan Scanlon, who open the film playing with their kids in the pool. Their picture perfect setting does not belie what is under the surface.

Bill’s father was archetypically strict, a man whose paternal skill set included harshly challenging his son to act like a man, instead of showing him how to be one. As an adult who now suffers from perfectionism due to his father’s dedication to it, Bill calls a foot fault on himself in a bowling game with his friends, despite the strike he’d just thrown being a game-winner. Sportsman-like, yes, but Bill wouldn’t be able to live with himself, or honor the memory of his father who’d died while being an on-duty police officer, if he’d won under “dubious” circumstances. 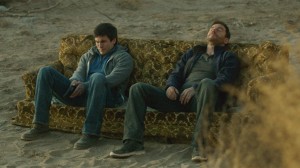 Slowly, Bill’s life begins to unravel. We’re introduced to him as he’s recording information for the insurance company he works for – only we find out he’d been fired and is on this project as a way to impress his old boss and get his job back. He not only doesn’t tell his wife he’d been let go, but doubles down on that by saying he’s actually in line for a promotion. His older son got caught at school for cheating. He’s defaulting on his mortgage. While wondering what to do, he sees his car get impounded and towed to a lot.

The second half begins when Bill hears a dog crying out in pain. He takes his revolver out of a safe to go investigate. Unable to save the dog, Bill shoots the pooch to put it out of its misery. In a convoluted sequence, with the gun still in his possession, Bill wanders out of one of the film’s many suburban desert landscapes and into the model home of a housing complex. Gun still in hand, he discovers a couple having sex in the bathroom. Upon seeing the gun and assuming they’re being robbed, they hand over all their money, no questions asked. A light goes off in Bill’s head.

What follows is a series of robberies that are juxtaposed with Bill’s wife becoming increasingly suspicious of the sudden increase in the extra hours he says he’s been working, as well as with his erratic behavior at home. The tension of the film speeds up when Bill’s drinking buddy and detective receives a police sketch of the man behind the recent string of robberies, and it looks very close to Bill. His wife eventually finds out the truth behind his employment, and with her additional discovery of a gun in his briefcase, takes their two kids in the middle of the night.

The film lacks originality, but at least has enough taste to steal from good sources. Some scenes, such as when an amped up Bill comes home from his first robbery and wakes up his wife for aggressive sex, mirrors Walter White’s actions following his initial meth adventure in the pilot episode of Breaking Bad. That After the Fall vaguely takes place in New Mexico doesn’t do much to differentiate itself from that groundbreaking show, nor does the fact that Bill’s robbery clothes look eerily similar to the Heisenberg outfit. Additional references, intentional or otherwise, are made to the Michael Douglas film Falling Down.

Wes Bentley, who audiences know better as the teenage drug dealing neighbor from American Beauty, was perfectly cast as Bill Scanlon. In both roles, he excels in playing nice guys with dark eyes that suggest still waters which run deep. Very deep. He is in virtually every scene, which is necessary, as no other characters have roles that are developed or are given much of a back story.

There isn’t much depth to After the Fall, and what depth we’re given are themes that audiences have seen before. However, the film was good enough to hold my attention, was well paced, and Bentley gave a tremendous performance.