AGENT CARTER ANOTHER WIN FOR MARVEL

If you want to succeed, you have to take risks. That has been Marvel’s guiding force since it first started its cinematic universe with Iron Man and it has yet to fail. Last night saw the premiere of the company’s newest risk, the mid-season miniseries Agent Carter, starring Hayley Atwell. 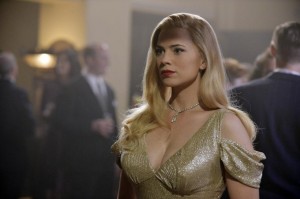 The eight week miniseries will follow Atwell’s Carter, last seen in the modern day during Captain America: The Winter Soldier. The show follows Carter in her prime during the late 1940s as she teams with Tony Stark’s father Howard (Dominic Cooper) and his butler Jarvis (James D’Arcy)  to foil evildoers.

One-part spy show, one-part period piece the series strikes a balance somewhere between The Rocketeer and Mad Men. Unlike Marvel’s last series, Agents of SHIELD, this one needs no time to find itself. Within the first five minutes it is clear just who Peggy Carter is and what her motivations are in the show. It helps that viewers are already familiar with Carter having met her in both Captain America movies so far.

Though the show had its fair share of Marvel shout-outs the level of confidence it exuded right out of the gate is amazing. Indeed, the show relies on the undeniable chemistry of Atwell and D’Arcy who already bicker like a very British married couple.  Their dynamic is very unique and one cannot help but be reminded of the “other” Avengers, Emma Peel and John Steed from the classic BBC series.  If you don’t know who I am talking about look them up, you won’t be disappointed.

Agent Carter fills many needs for Marvel and manages to succeed in all of them. For years now the comic book and pop culture community has been demanding more diversity and clamoring for a female superhero, it has found one in Peggy Carter. Unabashedly feminist in a time when it wasn’t popular Carter can not only hold her own in the boy’s club of the spy world but 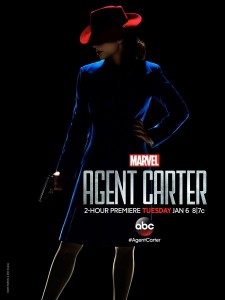 can dominate it as well.

The series makes excellent use of gender roles by having a Captain America radio series play in the background of a lot of events.  The radio program helps to cement Captain America as a pivotal figure in World War II but uses the Peggy Carter character (named Betty Carver for the show) as nothing more than a damsel in distress. During one key scene the radio series has Captain America beating up an evil Nazi while Carter fights against a bad guy and wins. The role reversal works perfect and shows that Carter is an equal to her male counterparts in the Marvel universe, not just there for show.

With each the company brings to both the big and small screen Marvel continues to prove why it is a media power house. Agents of SHIELD has found its groove in a big way during its second season, Agent Carter is another slam dunk and in just a few months the company’s Netflix shows will premiere. It should be interesting to see what Marvel can do without the restraints of network television censors.  My money is that whatever their next move is, it is going to work.