“Are you ready for a rock show? ‘Cause we’re gonna give you one tonight!” Indie Rock band The Airborne Toxic Event filled, what seemed like a large venue for them, on their hometown visit 10/30. 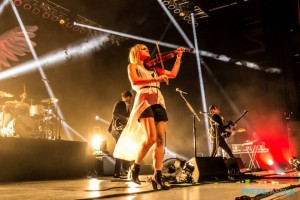 Full of energy and style, lead singer Mikel Jollett is always an exciting performer to watch (and hear). Several times during the night Jollett balanced himself on the crowd rail, holding on to a fans hand and insisting they never let go. Violinist Anna Bulbrook even took her place in the small pit via a full on stage dive. Needless to say, when you talk about seeing TATE live your first words have to be “they are rockstars.”

Aside from one of the best stage presences I have seen at The Greek this season, TATE is pretty easy on the ears too. Flowing through a 19 song set with subtle transitions, the group played all the “classics”. Fan favorites included radio smash “Changing,” “Sometime Around Midnight,” “Does This Mean You’re Moving On?” and Dallas Buyers Club’s “Hell and Back”.

What makes Jollett such an amazing frontman is his storytelling – both in his songs and his commentary. The Los Feliz crowd heard stories of keeping neighbors awake while writing and repeating songs on the keyboard all day, how Jollett’s dad was in the audience and thought it was beyond cool that his son was in a band, and even how the booker from The Echo once told them they would play The Greek one day.

Playing until curfew prevented them from doing anymore songs, the band seemed even more energetic at the end of their encore than at the beginning of the set. At some points throughout the performance it sounded as though Jollett’s mic was submerged under water, which may be a testament to the soundcheck that happened minutes before their set (which was my first time witnessing this at The Greek), but otherwise the LA band rocked the non-existing roof of the place. 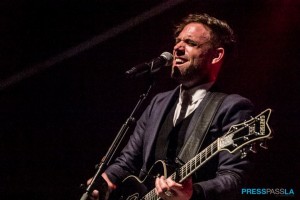 And for all who were lucky enough to be there, we’re keeping our promise not to mention a certain “slip-up” at the end of the show. We’ll keep it our little secret, Jollett.