The 7th Annual Turner Classic Film Festival kicked off in Hollywood last night and Press Pass LA was on the red carpet to catch all the action.

The festival, which highlights the role of classic movies in pop culture, brought out film lovers from across the decades. “This festival is about preserving the legacy of film for generations to come these extraordinary works of cinema that were produced by craftsmen who were masters of their craft and working in what many refer to as the Golden Age of movies,” notes actor Keith Carradine. 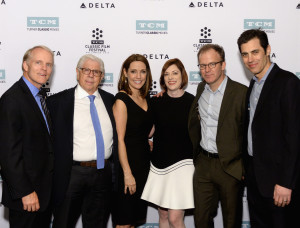 It is fitting then that the opening night film should be the legendary and influential All the President’s Men. “This film not only reflected the culture but advanced the culture in a lot of ways. I don’t think you could look at any newspaper movie the same after seeing the movie,” explains iconic film critic Leonard Maltin. “It was a document of this tremendous detective story between these two reporters that refused to give up and pursued this really significant story that led ultimately to the impeachment of the President of the United States, how many books or films can make that statement.”

No film in recent history has felt the impact of All the President’s Men than Spotlight, this year’s Best Picture winner. “You set out to tell a story and tell it well and when you get involved with projects you get a better understanding of the shape of journalism today, which isn’t so great, so to have that kind of positive impact means a lot to us,” explains the film’s director Tom McCarthy.

This year’s festival will focus on the art of the moving picture. Events include guest panelists like Suzanne Lloyd, film archivist Serge Bromberg and historian Cari Beauchamp. With a variety of musicals, silent films and cult classics this year’s festival promises something for everyone.