How do you breathe new life into an old franchise? By packing as much into it as you can of course! That seems to be the strategy of The Amazing Spider-Man 2, a film that fails on more levels than it succeeds. According to box office results, the movie going public is starting to realize it too.

That isn’t to say that the movie is outright horrible or painful to watch, it has its moments of epic cool that transcend the material, but those are few and far between. The main problem seems to stem from the fact that the movie felt like it was made in the mid-90s when superhero films were going through their Dark Ages.

For instance, the central villain of the story is Max Dillon played by the always fantastic Jamie Foxx, is a direct rip-off of Edward Nigma in Batman Forever. Foxx really comes into his own as soon as he turns into Electro and sheds the Dillon persona. But even then, the logic of his transformation into a villain teeters into Joel Schaumacher territory. There is one scene especially that involves a mad scientist that is so clichéd it will probably make you cringe.

Almost all the villains in the story, and this one is chock full of them, aren’t given nearly enough screen time to develop into real people. That is sad considering the level of talent the filmmakers are working with on this film including: Paul Giamatti (who deserves so much better), Dane DeHaan and Jamie Foxx.

Another major problem is they’ve turned their main hero into a jerk. Spider-Man has always been quick witted (something they’ve nailed in this movie) but the way he passive aggressively treats the people he loves is horrible. On more than one occasion he lays a thick layer of guilt on his loved ones making sure they see his side of things. It is a bad trait for someone that has been given the superhero title. At least in people like Tony Stark it’s acknowledged as a flaw but here it’s just brushed under the rug and, in many cases, validated. 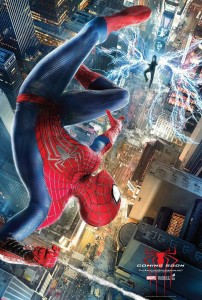 Amazing Spider-Man 2 was created not just as a sequel to the 2012 reboot but as a way to world build and open up into an expanded universe. This leads to some really uneven pacing and a movie that is easily twice as long as it should be once all is said and done. By focusing on franchise building instead of telling a good story it brings the movie’s quality down considerably. All the pieces were in place for a solid film but nothing ever quite gets there because everyone is too busy looking to the future instead of making a quality movie in the present.