Chicago’s Soldier Field welcomed the American Beer Classic (ABC) for its third year on Saturday. ABC provided 100 yards of pure bliss to beer enthusiasts. As Chicago’s largest beer festival, attendees had access to more than 75 breweries and over 200 unique brews.

Upon walking in the main entrance, you were greeted with a sampling cup and a booklet of drink tickets. The first sign informed fest goers to download event app which came in handy for not only did this map out event, the app was the only way to cast your vote for the Most Valuable Brew competition. ABC would announce one winner for the 2015 Most Valuable Brewery and the Most Valuable Brew based solely on attendee votes. 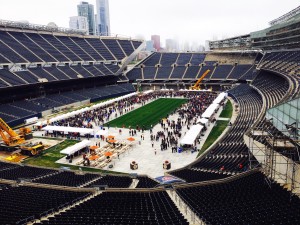 The main entrance area not only had two rows of brewery booths with brew samples, it also had food booths. Screamin’ Sicilian pizza, Green Mountain Gringo Salsa, Sabra Greek Yogurt Dip and KIND snacks all served up an assortment of finger foods and snacks. With all the samples of pizza, chips and salsa, greek yogurt dip and fruit nut bars, it was safe to say nobody would go onto the field hungry. Following beer fest protocol, traditional drinking games such as hammerschlagen, football toss and bags were setup and ready to appease fest goers.

On stage The Morning Kings kicked off the event with a perfect blend of rock and funk music. The band’s energetic sound created the optimum ambience to inspire fest goers to turnover their drink tickets at brewery booths. The same stage was later used for breakout educational sessions throughout the course of the festival. Sessions included Chip Hiden from the documentary, Blood, Sweat and Beers and Andrew Gill from the WBEZ podcast “Strange Brews.” 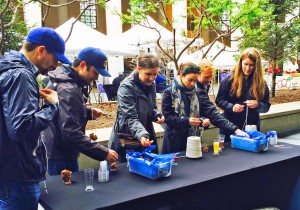 Attendees make their own pretzel necklaces.

My first pit stop at the fest was crucial. This booth offered beer fans not only a valuable resource of nourishment but the perfect beer pairing…the pretzel. It was a brilliant plan to have two large “Make Your Own Pretzel Necklace” booths, where you literally scooped pretzels out of bowl and assembled your own custom pretzel necklace. I would love to meet the person who came up with this genius idea. Who needs a bowl or bag when you have string? Now prepped with my sampling cup and pretzel necklace, I headed down the tunnel to the Bears home turf. Game on.

Walking into the stadium was absolute sensory overload. Having never actually been to Soldier Field before, walking on to the iconic turf surrounded by what seemed like infinite rows of stadium seats was utterly breathtaking. As my shock and awe wore off, my focus shifted to the white canopies in perfect rows on entire perimeter of the field. ABC gets an extra point for having signage on each tent that you can actually read from across the field. Some of the featured breweries included Brickstone Brewery, Smylie Brothers Brewing Co, Blue Moon, Leinenkugel, Curious Traveler, Crispin, Vermont Cider Company and Dogfish Head. 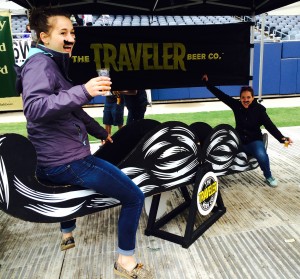 Located in the end zone, Maplewood Brewery & Distillery, known as the first brewery/distillery hybrid in Illinois, scored huge with fest goers votes for pouring flavorful brews such as The Fat Pug Milk Stout and the Charlatan Pale Ale. Their Creepy Ginger Belgian Blonde Ale instantly seized my interest to be my next brew sample. After my first sip, I knew that this creepy ale captured this ginger lovers heart. Without a doubt one the most refreshing brews I have ever tasted. Blitzing the competition, Maplewood Brewery & Distillery was named 2015 Most Valuable Brewery. Just a few yards down was Cahoots Brewing field position. They are nothing but honest when saying the No S’More Barrel Aged Imperial Stout was a result of a miscalculation in brewing process. Their not “carrying the one” in that calculation won them the 2015 Most Valuable Brew. This brew was in high demand by beer fans and sparked a lot of conversation around its booth.

Approaching half time at ABC I started noticing a peculiar trend. Everyone seemed to be sporting mustaches. Tackling this mystery was next on my agenda. I headed towards a large huddle of fest goers at the Traveler Beer Co. tent and solved the mustache enigma. Beside the booth was an actual mustache seesaw. To make things even more interesting, enthusiasts stuck on a “‘stache” on their faces in the spirit of the mustache the Traveler Beer Co. logo boasts. The brewery prepared fellow stache devotees for their teeter-totter ride with their Curious Traveler, Forbidden Traveler and Illusive Traveler brews. This booth was by far one the most entertaining at the fest.

As if the highly awesome beer tasting was not enough, ABC offered a time out option for fest goers. An official Soldier Field tour was a great way to explore the stadiums history. We went through the Skyline Suites and the Colonnades. There was no access to the Bears den but we did stop by the visitor’s locker rooms. The tour even allowed Packers fans to share in the stadium excursion.

If your goal in going to fest was to try as many flagship beers from local and regional breweries, this fest did not disappoint. Touchdown ABC.