HUR-RY! HUR-RY! HUR-RY! Step right up if you dare and see the phantasmagorical wonders of Ryan Murphy, the Emmy-winning writer and creator of your odious obsession, your deviant delight, your monstrous masterpiece of macabre minstrels, American Horror Story: Freak Show! 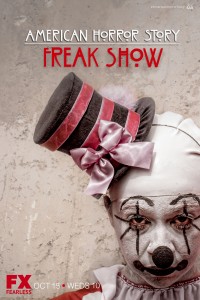 A few years ago, HBO’s excellent series Carnivale dropped its loyal viewers off a cliff so huge that it made the one that David Chase shoved us off at the end of Sopranos look like a mole hill. I think I’m still at terminal velocity from Carnivale‘s sudden cancellation after a season two finale shocker.

But now this minor horror genre will get its just dues. Watching this I am of course reminded of Tod Browning’s iconic 1932 film Freaks about a circus troupe, cast with actual ‘freaks.’ This film was disturbing, not really because of their various ‘disabilities,’ if that’s what you want to call them, but their creepy circus comradeship and what they do to those who wrong them.

This theme of carny loyalty was also found in Carnivale  and now we see it in American Horror Story. The year here is 1952 in Jupiter, Florida. Americans are starting to put televisions in their living rooms, finding their entertainment at home. No one needs the carnival for their cheap thrills anymore.

But now people are getting murdered by the creepiest clown in the history of creepiest clowns. Now I know that all clowns are creepy. But this clown takes the pie to the face. I have even read excerpts that Twisty the Clown even scared crew members in between takes. So with that, and the police having no suspects, they look to find some easy targets at the circus.

Their ringleader is Elsa (Jessica Lange, in her final AHS season), a German with her owns reasons for guiding this troupe. She seeks out new talent in the premiere and finds her new ‘headliner’ in Bette and Dot Tattler, conjoined twins, one body, two heads played by series alum Sarah Paulson. Both of these women have their own distinct personalities, one is demure and naive, the other is cold and untrusting. Paulson’s dual role with such a fascinating character should surely break her out of the ‘honored to be nominated’ category to the ‘Murphy Brown ain’t got nothing on me!!’ level at next years Emmys and Golden Globes.

Also returning is Evan Peters playing Jimmy Darling. Darling suffers from being socially outcast as a circus freak and syndactyly (lobster hands). Though I give Jimmy credit for finding a way to use those misshapen hands to relieve women’s ‘stress’ before the invention of the sybian. I know where is top two fingers end up, but where did the other two go?

The police close in, the troupe defends their own, making things in Jupiter not ascending, and the circus’s opening is pushed back. This was not an allegory on the delay of the Wachowski’s Jupiter Ascending, by the way. So what can we look forward to?

Twisty just seems to want an audience, but has no patience for hecklers or anyone who doesn’t get his brand of humor. So he chops those people to bits. But Twisty has found a friend who appears normal, but is just as scary on the outside as Twisty is on the inside. Their relationship is kind of like The Toy directed by Rob Zombie. Where Twisty and the circus fit together is yet to be revealed, but you have to think they are somehow linked.

The circus will have its own problems with new strongman Dell Toledo (Michael Chiklis) attempting a bit of a coup, and the police looking at the twins for another murder. This season will be fascinating with this setting, but the prevailing tide comes down to people. Never mind that there is the smallest person in the world (played by Jyoti Amge, the actual smallest person in the world), a kid who bites the heads off of chickens for his act, a bearded lady (Kathy Bates), and this guy, to name a few.

This season will give us the inner workings, the politics, and the relationships of these people. That will be the motivating force for whatever happens outside of Twisty’s antics. We already see the green-eyed monster’s seed planted in Dot Tattler, whose jealousy of her sister, if nothing else, makes for a great character study. 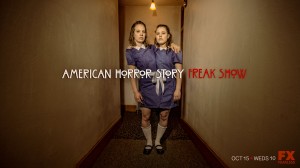 But I am sure there will be more. There always is with AHS. As I barked in the beginning, Ryan Murphy now has a pedigree, so I am not worried about what the larger theme is yet, I have been content seeing the denizens of the circus and their interactions with each other and ‘regular’ folk.

Right now the show is about an 8/10. It could easily go to 9/10 given the potential of this cast and setting. My parents always kept me from these tents when the fair came to town, now I understand why. One of us! Gooble Gobble!