The top 12 American Idol hopefuls continued their journey tonight, but only eleven got their chairs turned green to advance to next’s week show.

As all elimination shows are, Idol was full of suspense as host Ryan Seacrest announced who America chose to advance This is how the night went…

The first singer to advance was Rayvon Owen, he performed “Burn” by Elie Goulding and the crowd absolutely adored him when he hit those high falsetto notes. Keith Urban praised Owen, saying “…for me that was your best performance.”

The second, was country singer Maddie Walker, she performed “Country” and received positive notes from all the judges, Jennifer Lopez called her performance, “sassy and sweet.”

The third name called was Joey Cook who sang a jazzy version of the hit song “ Fancy”. Cook received one of the loudest applauses of the night and turned me into a Joey Cook fan!

Clark Becham was the fourth name called and he hit the stage with “Takin It to the Streets,” he performed this song along with his piano and his strong rugged tone blew everybody away but even though his voice soared through the building it was not enough to impress all the judges. Harry Connick did not feel it was his best performance but did tell the singer to “just keep doing what you’re doing.”

The fifth spot was taken by the edgy Jax, who performed Taylor Swift’s hit song “Blank Space,” and even though Scott Borchetta was the week’s mentor, Jax’s performance did not win the judges. Lopez argued that the song was the not the right fit for Jax, and Harry finished it off by calling it a “carbon copy” of the original artist.

The stylish Qaasim Middleton continued pouring his soul on the Idol stage and performed Paul McCartney’s “Jet,” as he took the sixth spot.

And the loudest pop of the entire night went to Adanna Duro, from the looks of it, she is a crowd favorite-as she rocked the stage to Bruno Mars’s “Runaway Baby,” all three judges were very impressed by which the singer was able to control her movement on the stage and took more control of her vocal chords.

The eighth chair to turn green belonged to Tyanna Jones, and it was well deserved because at the end of her performance she received a standing ovation from both Jennifer Lopez and Keith Urban, Harry also made a statement saying if he were a judge in the Olympics he would give Tyanna a perfect ten.

The youngest of the contestants also continued to next week’s show, Daniel Seavey, 15, sang what seems to be the current anthem of America, “ Happy” by Pharrel Williams, everybody loved it and Harry called Daniel “immensely talented.” 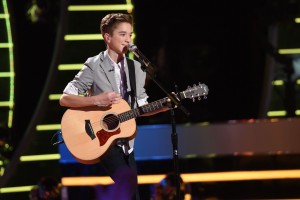 With only two spots left Quinn Madison took one of the covenant spots and performed “Rolling in the Deep” by Adele. Although he advanced he did not get the greatest reviews, Harry said his version of the song was a “shallow interpretation” but Lopez defended him by saying he went for a new beat and stuck to the soul.

And in one of the most suspenseful moments of the night-one spot left and two very hopeful singers. The last spot went to Nick Fradini, and even though Serena-Joi Crowe sang her heart she did not win the only save of the season from the judges.

That was all of the top 12 performances of American Idol XIV! And there was also a very special performance from the cast of Empire, who performed live for the first time outside the show.

Tune it next week to American Idol and find out who advances onto the top ten!