On November 22, 2015 the 43rd American Music Awards will take place in the Microsoft Theatre in Los Angeles and will be hosted by Jennifer Lopez. But before the hardware gets awarded and the red carpet rolled out, nominees and presenters were invited to a gift lounge at the W hotel in Hollywood.

Press Pass LA had the chance to check out the AMAs swag presented by Celebrity Connected. There were many booths on hand but a few stood out in particular for their creativity and originality. 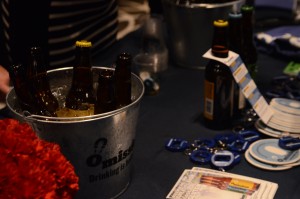 Omission Beer had their three styles available for sample: IPA, Lager, and Pale Ale. All of them were delicious and refreshing, and what makes them unique is that during the brewing processes Omission adds an enzyme that doesn’t change the beer’s flavor but does destroy the gluten in the beer. Yes, we said gluten-free beer!

Speaking of alcohol, the Dennis Rodman Bad Ass Premium Vodka brand was on hand to brighten everyone’s day. Although one must always question the quality of a celebrity crafted and sponsored vodka, this was smooth and easy to drink, and the bottle design is straight from the head, or skin rather, of Rodman. 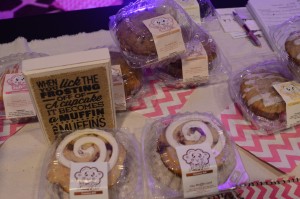 After a few drinks it’s always nice to put some food on the belly, and Taryn Vandervoort a.k.a. The Muffin Girl came through in the clutch. Her muffins are handmade daily from recipes Taryn crafted herself, creating a delicious puffy and moist pastry that anyone can enjoy. The apple pie and lemon poppy seed flavors were particularly delicious! 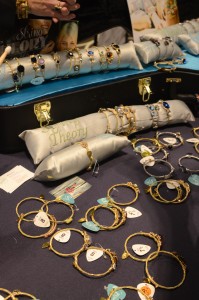 What better way to finish off a meal than with a few puffs off the vaporizer? Cory Travalena has got you covered with his soda-flavored e-liquids from his company Juice Parlour. The root beer flavor won Best in Show for Drink & Cocktail flavors at this year’s Vape Summit in Las Vegas.

It wasn’t just sex, drugs and rock & roll at the lounge though; there was fashion and style as well. String Theory Instrumental Jewelry easily embodied the spirit of the event best with their music themed bracelets and rings. Using guitar strings to create the bracelets, each piece stands out for its individuality, and designers Amanda and Hillary Wells hope to branch out into all areas of jewelry soon.

The gift lounge at the W for the 2015 AMA’s couldn’t have embodied the spirit of American Music any better. It had something for everyone’s tastes and was fun, loud, and full of energy.