Joss Whedon: The Biography has hit the shelves and is quickly making waves in the entertainment community. Written by Amy Pascale the book sheds insight into Whedon’s creative process and let’s readers into some of the more obscure details of his greatest creations.

Press Pass LA had the chance to sit down with Pascale to discuss the creation of the book, her love of all things Whedon and getting to know the man himself.

PPLA: From your writing it is clear that you were a Joss Whedon fan before you wrote the biography. What was your first introduction into the Whedonverse?

AP: I was one of the people who liked the 1992 movie! As a 90210 fan, I initially watched it for Luke Perry but it was the dialogue and the idea of a girl being in charge of saving the world from vampires that hooked me. I caught a few episodes of Buffy in its first season on the WB, but I didn’t start watching it regularly until the third season in the fall 1998.

PPLA: Did you find Whedon a tough subject to crack for the biography?

AP: Joss Whedon has been pretty open in interviews and his own posts for years, which definitely helped give a general sense of his personal feelings on his projects and experiences.

I’d say that keeping up with all the facets of his projects was one of the more difficult parts in writing the projects. Once I had the narrative structure, I struggled to find an organic ending to the book, which changed several times as Whedon announced a new film or TV series.

I started in February 2011, when production was beginning on The Avengers, and in the time leading up to the book’s publication, the film had been shot and released and Whedon was signed to do the sequel; Much Ado About Nothing was filmed and released; Agents of S.H.I.E.L.D. was greenlit and ran a full season; In Your Eyes was filmed and released online through Vimeo. I made a lot of changes and additions to earlier chapters when he’d expound upon a memorable personal experience in interviews promoting those projects, as they often gave more insight and emotional depth to facts I already had.

PPLA: Whedon is still fairly young, would you consider doing another biography of him toward the end of his life?

AP: I would jump at opportunity to have several years to do in-depth interviews with Joss’ family and collaborators. For an unauthorized biography, Joss and his wife Kai were incredibly generous with their time and memories, but I would have loved to have many, many more conversations with them as well as the actors and writers that I wasn’t able to connect with for this book.

I also think that, quite understandably, people are far less candid about experiences that are still relatively recent and could be more open to discuss the more difficult moments several years down the road.

PPLA: What was your favorite part of the biography process?

AP: In my research for the book, I’ve read just about every available interview with Whedon and Whedonverse writers, actors and producers. I was so excited to get the chance to talk to them about the more personal details of each project, which lead to a discussion with Tom Hiddleston about the e-mail he sent to Joss after reading The Avengers script, or David Solomon telling me about the argument he got in with Joss when editing the Buffy pilot presentation for The WB. And I adored Kai’s story about their Nancy Drew mystery-filled road trip, and Joss’s extreme disappointment and devastation when she decided to read ahead on while he was sleeping. I couldn’t wait to share those stories with his fans. 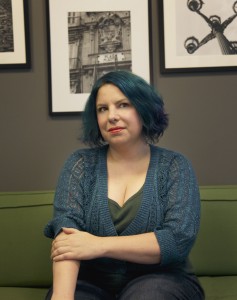 PPLA: How did you get Nathan Fillion on board to do the forward?

AP: Much of Fillion’s forward comes from the interview I did with him. I was so moved by what he said (and quite inspired by our overall discussion – he’s incredibly contemplative and engrossing) that I had used it as the opening to my initial introduction. My editors were also taken with it and asked if I could approach Fillion to do the forward. I was thrilled to quickly get a response that he would, and after he edited and rewrote a few parts, the book had an official forward from Nathan Fillion.