AN OUT OF THIS WORLD PREMIERE FOR NAT GEO’S MARS

Press Pass LA was in attendance for the premiere of the new miniseries  MARS. Backed by Executive Producers Ron Howard and Brian Grazer the documentary and scripted show will air this November on the National Geographic Channel.

The Beverly Hilton hotel hosted the out of the world red carpet event. Cast members Olivier Martinez, Anamaria Marinca, Sammi Rotibi, Ben Cotton were among some of the actors that made appearances. Complete with a space themed photo booth, drinks and food.  Authors Andy Weir of “The Martian,” Stephen L. Petranek of  “How we’ll Live on Mars” and Ari Friedlaender of “Unframable” signed copies of their latest books for eager fans.

Press Pass LA sat down with cast members Sammi Rotibi and Anamaria Marinca to get a more in depth preview of MARS. 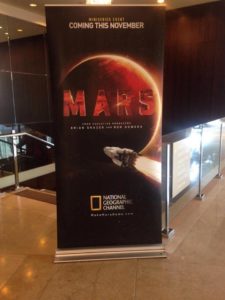 Sammi Rotibi who plays one of the main astronauts on the scripted side, described his character as the mechanical engineer or the “fixer” of the shuttle. “It’s a great role,” says Rotibi. “For me as an actor, this is the greatest experience for me. He continued to praise the cast and Executive Producers Ron Howard and Brian Grazer. “A big wow- such a track record of successful, very good projects that raised the bar, says Rotibi. “Any actor would jump to work with them.”

Rotibi discussed the perfect timing of this show because Mars is possibly the next planet after Earth that is habitable. He mentioned before the show, he never knew about space and science fiction. “But this show really opened my eyes to this world,” says Rotibi.

Another astronaut, played by actress Anamaria Marinca, shared how surreal the entire experience has been for her. “We just finished shooting literally two weeks ago- and now we are here in Los Angeles presenting the show to the world,” says Marinca. “I’m going to see one of the trailers for the first time tonight.”

Although she would not share any spoilers, Marinca did explain the main mission for the astronauts is to discover life and to colonize the red planet. Will they succeed? Stay tuned this November on Nat Geo to find out.