AN UPDATED CINDERELLA COMES TO THE AHMANSON STARRING FRAN DRESCHER

I feel like I’ve been living in a fairytale lately. Last week I attended the red carpet premiere of Disney’s “Cinderella” and last night I found myself sitting in the orchestra of the opening night of Rodgers & Hammerstein’s Cinderella at the Ahmanson Theatre starring Fran Drescher as the evil stepmother.

Both magical experiences featured audience members dressed like princesses and the same basic story. However, the play made me realize just how accustomed I had become to the Disney retelling of this classic fairytale.

The play nixes the Prince’s ill-fated father altogether (and we all know parental death is usually the inciting incident in every Disney tale) for a royal advisor. It also features a more playful antagonistic relationship between Cinderella and her stepmother rather than pure evil, perhaps more fitting for Drescher in the role. It includes a secret “conspiratorship” (aka friendship) between Cinderella and her step sister Gabrielle over Garbielle’s secret romance with townsman Jean-Michel, and Gabrielle’s knowledge that Ella is indeed the Prince’s mystery woman (YES, she knows!) Perhaps the biggest change for me, was that Cinderella does not leave her glass slipper at the royal ball (GASP!) This happens in a second gathering the Prince throws to woo her back to the palace.  All this aside, the basic premise remains untouched. A Prince falls in love with a common girl who lives with her evil in-laws and needs the help of her fairy godmother to fulfill her destiny. It’s your typical boy meets girl, boy loses girl, boy must get girl back story that countless romances have been built upon. And changes aside, I was sucked into this fantasy!

It should also be noted that the show itself  had been upgraded from the version which Richard Rodgers and Oscar Hammerstein II originally created for a 1957 TV musical starring Julie Andrews. The current play is directed by Mark Brokaw and choreographed by Josh Rhodes, with an update from writer Douglas Carter Beane to include 21st century references- some which worked and others which frankly did not!

The cast included Paige Faure as Ella (Cinderella), Fran Drescher as Madame (the evil stepmother) and Kaitlyn Davidson and Aymee Garcia as Gabrielle and Charlotte respectively (the stepsisters). The a-typical prince is played by Andy Huntington Jones (Prince Topher) with Branch Woodman as Sebastian (the prince’s advisor), and David Andino as the town reformer Jean-Michel. Kecia Lewis stands out as the woodland beggar ‘Crazy Marie’  turned fairy godmother belting out songs including “It’s Possible” and “There’s Music In You,” while literally flying about the stage in a purple gown!  There were even a few mice and woodland animal puppets who of course become Cinderella’s coach and horses in her time of need.

Faure makes for an innocent and relatable Cinderella with a powerful but sweet voice, winning the audience over with “In My Own Little Corner.” Jones plays the part of an unsure-of- himself, yet good-hearted Prince perfectly, and Drescher had the audience in chuckles with her quick one-liners and classic laugh a la “The Nanny.” But Lewis stole the show as the crazy beggar turned godmother explaining to Ella, “There are a lot of crazy women in beautiful dresses.” Can I get that on a T-shirt? Preach! 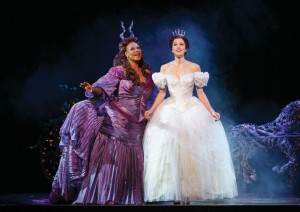 For me, perhaps the most magical part of the play were the gowns designed by William Ivey Long. Their quick-change capabilities had Ella from rags to riches right before my eyes and I could have sworn it was actual magic (though I learned backstage it involved some pretty nifty magnets!) The only fashion faux-paux for me was the second gold gown and Cinderella’s curled brown locks (yes, she was not a blonde) which felt very Beauty and the Beast.  There I said it. The dress was GORGEOUS but you know you were thinking it! Perhaps, I just can’t get Disney off the brain.

The biggest misstep of the play for me was the democratic and feminized ideals which seemed quite overtly pushed upon the audience.  At the end of the second half, I wasn’t sure if I was at a feminist rally or a campaign for Hilary for President.  When I go to see Cinderella, I am going to see a girl who falls in love with a Prince. Full Stop.  While I liked that the play version of Cinderella did make her seem stronger, more intelligent, and almost a mentor to the Prince, I honestly just didn’t NEED her to be. I think in a world where as an audience we have become so sensitive to political messages and gender equality, it felt a bit contrived. I am plenty feminist and independent, but sometimes I just want to be a little girl again who dreams of glass slippers, royal balls, and true love’s kiss.

That said, I did enjoy my time in the palace! Once the curtain lifted, opening night concluded with a well-deserved standing ovation for the cast. I then made my way backstage and was given a rare opportunity to see the Ahmanson from the performers viewpoint. I would be lying if I said it didn’t feel like a fairy godmother had granted a wish of mine to stand upon a Broadway stage and look out to where I had just been seated.

As I made my final exit, I spotted Fran Drescher and Charles Shaughnessy embracing (The Nanny reunion!) I swear I heard Fran’s familiar “Oh, Mr. Sheffield” in my head. A magical night indeed.